Whenever I travel for work, I love to share information on dogs from those locations.  Having been in Wellington this week, I took the time to visit a favourite site of mine:  Paddy the Wanderer’s drinking fountain.

Located on the Wellington waterfront in front of the Academy of Fine Arts building, this memorial was erected in 1945 in the memory of an Airedale Terrier who was nicknamed Paddy the Wanderer. 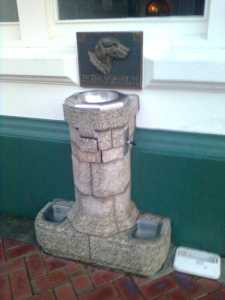 The drinking fountain for people and dogs erected as a memorial for Paddy the Wanderer in Wellington, New Zealand

Paddy’s original name was believed to have been Dash and he was owned by a little girl named Elsie whose father was a seaman and, for this reason, he was a frequent visitor to the wharves.  Elsie passed away at the tender age of 3 1/2 years from pneumonia and the dog began to wander the foreshore area, some saying it was in search of the little girl.  And somewhere along the line he was given the nickname of Paddy.

Paddy was a celebrity of sorts on the Wellington waterfront during the Depression years.  Harbour board workers, seamen, watersiders  and taxi drivers took turns at paying his annual dog license.  His fame grew as he joined ships that traveled to various port cities in New Zealand and Australia.  In December 1935 he even took an airplane ride in a gypsy moth.

The Wellington Harbour Board gave him the title of Assistant Night Watchman with responsibility for keeping an eye out for pirates, smugglers and rodents.  As he aged, Paddy did less wandering and  he grew ill.  He was given a sickbed in a shed on the wharves and he had many visitors who were concerned for his welfare.

When Paddy died on 17 July 1939, obituary notices were placed in the local papers; a radio tribute was also  broadcast.   Paddy’s body was accompanied to the city council yards for cremation by a funeral procession of black taxis.

Paddy’s memorial fountain was built using stones taken from Waterloo Bridge in London and paid for with funds raised by his friends and admirers.  Its design includes two drinking bowls at the bottom for dogs, much like the designs for fountains we see today in our dog parks.

Paddy’s story is also told in a children’s book written by Dianne Haworth and published by Harper Collins.