Every sector has an issue that, if not managed, becomes its downfall.  In the dog world, I think this issue is poo.  More specifically, it is poo that is not cleaned up. 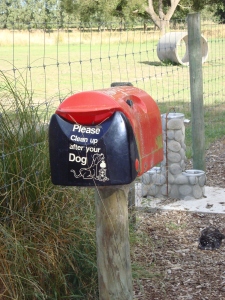 A woman complained in our newspaper recently about the amount of dog poo that had not been picked up at a local dog park. I have been at our dog park and watched as dog owners conveniently ‘don’t see’ their dog do a poop.  Even less common (and perhaps something to do with kiwi culture?), are the other dog owners who see it but do not bring it to the dog owner’s attention.   I have found that most dog owners are embarrassed and very willing to clean up when the fact of the dog’s neglected poo is mentioned.

In Poole (UK), the local council has resorted to more overt tactics to get dog owners to recognise the errors of their ways.  They spray paint piles of poo green to highlight the scale of the problem.  It was reported that 200 piles of poo were found in one street alone.[1]  The painting campaign augmented other initiatives such as a crackdown by council officers in issuing fines.

In New Zealand, we have the benefit of a lower population density but that should not make us complacent about this problem.  Cities such as Auckland and Christchurch are actively encouraging infill housing and more urban development to stop urban sprawl.  Over time, people and dogs will be living much closer together.

We need to find ways to peacefully co-exist with one another; and leaving faeces for people to step in is not one of them.  There are also indications that dog waste contributes to water pollution through runoff.

Since August 2009 (when most supermarkets began charging for carry bags) free bags are harder to come by.  Our dog park has posted at least one plea for urgent bag donations.  However, is the lack of a plastic bag an adequate excuse for not cleaning up after your dog?

There are plenty of other sources of bags and responsible dog owners always have a supply, even in the glove box of the car. Ask your non-dog-owning friends and co-workers to save bags for you.  Bread bags and produce bags work just as well as carry bags.  As a last resort, a roll of freezer bags will set you back a couple of dollars at the supermarket.  The last roll I purchased allowed me to pick up no less than 60 piles of poo!

It is very concerning to see the evidence of dog owners who are not cleaning up after their dog.  It gives all of us a bad name.  If your dog could talk, I wonder if they would say, “I poop.  You pick it up.  Any questions?”[2]

6 responses to “The public relations nightmare of unscooped poop”