How scrap metal could help a dog in need 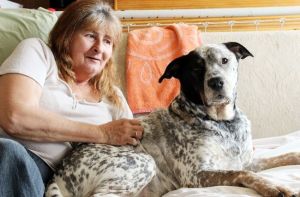 Tucker and Rejeanne Asselin, who is appealing for donations of scrap metal to help fund Tucker’s surgery (photo by Fort Erie Times)

Seven-year-old Tucker is a Blue Heeler-Boxer mix who needs surgery to remove a piece of plastic that has embedded itself in his tongue.  His owner, Rejeanne Asselin, said she needs to come up with at least $800 to pay for his medical bills.

Since Asselin lives on a disability pension, her fixed income leaves little room for spending on Tucker’s medical care.  So, she is appealing to her local community of Fort Erie, Ontario, to donate any scrap metal, copper, aluminum, pop cans and beer bottles that can be recycled and exchanged for money that will help pay the vet bills.

“It might not be much but it all adds up in the long run,” Asselin said.

“Everyone has scrap metal, or these kinds of things lying around the house. Every little bit helps.”

Asselin first noticed something was wrong with her “good companion” in January when he wasn’t eating or drinking very much.  It took her until February when she had saved enough money to take him to the vet for an exam.

At first, the veterinarian thought Tucker might have cancer. After he was given some antibiotics and pain medication, Tucker was sent home. The swelling in Tucker’s mouth eventually went down and upon further examination from the veterinarian, it became clear something was embedded in Tucker’s tongue.  It’s likely some type of plastic.

The foreign object can’t be removed until Asselin comes up with enough money to pay for Tucker’s treatment.  He is still on pain medication but is having difficulty eating and is restricted to soft food.

“He is my protector, my guardian and my family.  You can tell he’s in pain.  But, Tucker is a very sweet dog.”