Just when you think I’ve run out of ways to report on new ways dogs are working as assistance/therapy dogs…I introduce you to Flossie. 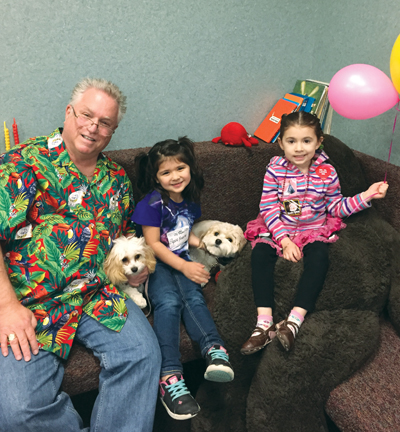 At the 10,000-square-foot Virginia facility, Golden Pediatric Dentistry & Orthodontics, Flossie is free to run around with one job: to make people comfortable wherever they are. Flossie has been coming to the office since she was 8 weeks old in 2012.

“I would say, ‘Back to work,’ and she goes out and finds a lap to sit on, or sometimes she cuddles with the kids,” Dr. Golden said. “She’s good at it.”

With the success of Flossie, Dr. Golden said he’s been considering creating a resource for dentists who are interested in using therapy dogs in their practice.

Flossie, a Cavachon (Bichon Frise/Cavalier King Charles Spaniel cross), received her therapy dog certification from the Alliance of Therapy Dogs.  New patients are informed that Flossie works at the practice so they are ready for her presence in the office when they arrive.

For patients that are particularly frightened of dogs, or who have severe allergies, Flossie is sent to her official resting area, which is fenced off and has a dog bed.

Dr Golden’s partner in practice is so impressed by what Flossie brings to the practice that he has his own dental therapy dog in training, Lexa.