A study of dog DNA has revealed a genetic mutation linked to flat face shapes such as those seen in pugs and bulldogs.

The research reveals new insights into the genes that underpin skull formation in people and animals.  Scientists say their findings also shed light on the causes of birth defects that affect babies’ head development in the womb.

Researchers at the University of Edinburgh’s Roslin Institute analysed DNA samples from 374 pet dogs of various pedigree and mixed breeds. The dogs were being treated at the Royal (Dick) School of Veterinary Studies. 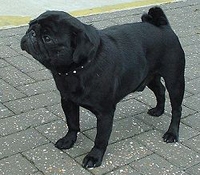 All of the animals underwent body scans as part of their care, producing detailed 3-dimensional images of the dogs’ heads.  These high-resolution images — called CT scans — enabled the researchers to take precise measurements of the shape of the dog’s skull.

By comparing the dogs’ genetic information with measurements of their skulls, the team were able to pinpoint DNA variations that are associated with different head shapes.

One variation — found to disrupt the activity of a gene called SMOC2 — was strongly linked to the length of the dog’s face. Animals with the mutation had significantly flatter faces, a condition called brachycephaly.

Babies are sometimes born with brachycephaly too, though little is known about its causes. Scientists say screening children for changes in the SMOC2 gene could help to diagnose the condition.

Lead researcher Dr Jeffrey Schoenebeck, of the University’s Roslin Institute, said: “Our results shed light on the molecular nature of this type of skull form that is so common and popular among dogs.”