Despite those velvet paintings of poker-playing dogs smoking pipes, cigars and cigarettes, our canine friends really don’t use tobacco. But like many humans who have never smoked, dogs still get lung cancer. 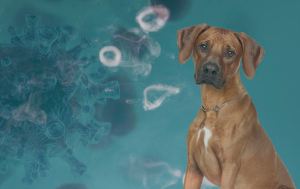 And, like many women who develop a particular type of breast cancer, the same gene — HER2 — also appears to be the cause of lung cancer in many dogs, according to a promising new study of pet dogs led by the Translational Genomics Research Institute (TGen), an affiliate of the City of Hope, and The Ohio State University.

Published in the journal Clinical Cancer Research, this study could have significant implications for people who have never smoked.

TGen and Ohio State found that neratinib — a drug that has successfully been used to battle human breast cancer — might also work for many of the nearly 40,000 dogs in the U.S. that annually develop the most common type of canine lung cancer, known as canine pulmonary adenocarcinoma, or CPAC.

Neratinib inhibits a mutant cancer-causing form of the gene HER2, which is common to both CPAC and HER2-positive human breast cancer patients.

“With colleagues at Ohio State, we found a novel HER2 mutation in nearly half of dogs with CPAC. We now have a candidate therapeutic opportunity for a large proportion of dogs with lung cancer,” said Dr. Will Hendricks, an Assistant Professor in TGen’s Integrated Cancer Genomics Division, Director of Institutional Research Initiatives, and the study’s senior author.

Based on the results from this study, a clinical trial using neratinib is planned for dogs with naturally occurring lung cancer that have the HER2 mutation.

“This is the first precision medicine clinical trial for dogs with lung cancer. That is, the selection of cancer therapy for a particular patient is based on the genomic profile of the patient’s tumor and matched with agents that are known to specially target the identified mutation,” said Dr. Wendy Lorch, an Associate Professor in the Department of Veterinary Clinical Sciences at The Ohio State University College of Veterinary Medicine, who also will run the study’s clinical trial.

“Our team at The Ohio State University has worked for years to find treatments for canine lung cancer. This breakthrough shows the value of these studies for dogs, as well as humans with lung cancer who never smoked,” said Dr. Lorch, who also is the study’s lead author.

CPAC is an aggressive disease that clinically resembles human lung cancer among never-smokers. There is no standard-of-care treatment for CPAC and — prior to the work performed by the TGen-Ohio State team — little was known of the disease’s genetic underpinnings.

“These results are the first example of our efforts to adapt genomics tools from the human world, such as gene sequencing and liquid biopsies, to generate novel insights in canine cancers, with mutual benefit for both,” said Dr. Muhammed Murtaza, Assistant Professor and Co-Director of TGen’s Center for Noninvasive Diagnostics, and one of the study’s contributing authors.

While the sequencing of hundreds of thousands of human cancer genomes has driven the transformational development of precise targeted cancer treatments for humans over the past decade, relatively few canine cancer genomes have undergone similar profiling. The canine cancer genomic discovery and drug development efforts of the TGen-Ohio State team are pieces of a larger puzzle that could similarly transform veterinary oncology, while creating bridges between canine and human cancer drug development.

“This study is groundbreaking because it not only identified a recurring mutation in a canine cancer that had never been found before, but it actually led directly to a clinical trial,” said Dr. Jeff Trent, TGen President and Research Director, and one of the study’s contributing authors. “This clinical translation from dog to human and back is the holy grail of comparative cancer research.”

Lung cancer is the leading cause of cancer death in the U.S., annually taking the lives of more than 154,000 Americans.

“This study is really exciting to us because, not only have we found a recurrent hot-spot mutation in a canine cancer that had never been found before, but it actually has direct clinical translational relevance. For humans, we already have drugs that can inhibit many dysregulated proteins. We hope to show that we can provide the same benefit for dogs with canine cancers,” Dr. Hendricks added.

No dogs were harmed in this study. Only pet dogs with naturally occurring cancer were examined.

This study — Identification of recurrent activating HER2 mutations in primary canine pulmonary adenocarcinoma — lays the foundation for potential rapid translational development. Follow-up clinical and genomic studies have been funded in part by a $300,000 grant investment from the Petco Foundation made possible through their 10-year Pet Cancer Campaign in partnership with Blue Buffalo. Susanne Kogut, President of The Petco Foundation, said her organization’s investment in the next phase of TGen-Ohio State studies is part of a larger effort to improve the health and welfare of pets everywhere.

“We are so excited to be a part of this study of canine lung cancer, which we hope will rapidly benefit our pet, and pet-parent, communities worldwide,” said Kogut, who in 2016 was named one of 25 “women of influence” by Pet Age magazine.

Willa is a special dog.

An American Pit Bull x Boxer, Willa has breast cancer which has likely spread. She’s on medication, but with time being precious, it’s important to focus on quality of life.   Willa is a popular sleepover dog at Best Friends Animal Sanctuary – every precious sleepover adds to Willa’s quality of life and enrichment.  She really enjoys getting out of kennels, getting cuddles and having a good, deep sleep.

Willa loves rides in the car

Big smile from Willa to be in a real bed 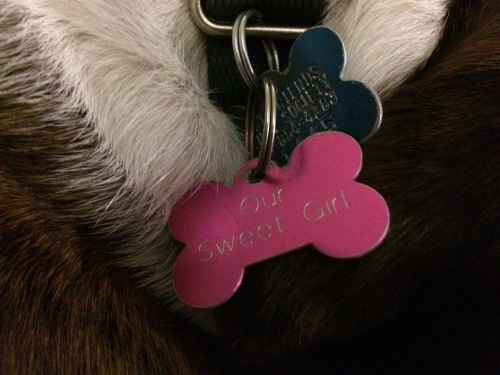 A special tag for a special girl

I really enjoyed staying with Willa and seeing her sweet nature in person.  Let’s hope she gets a home soon.

Cancer is one of the most frequent diseases not only in people, but in pets as well. Like people, dogs can also suffer from cancer of the mammary glands (mammary tumors). Dog mammary tumors are very similar to breast carcinoma in humans, and much more so than those of rats or mice, for example. For this reason, research on canine mammary tumors is important for human medicine as well. A study performed at the University of Zurich has now shown how similar mammary tumors are in both people and dogs.

For the development of tumors and the progression of a carcinoma, not only the characteristics of the cancer cells themselves are decisive, but also the cells surrounding the tumor play a major role in this. Many tumors even have the capability to reprogram healthy cells in the tumor environment in a way that they start to support the growth of the cancerous cells. This mechanism plays an essential role in human breast carcinoma – but is it the same for dogs? The similarity of breast carcinoma in dogs and humans has been known for a long time. “But whether these tumor cells also influence the surrounding tissue in dogs the same way they do in humans was unknown until now”, explains Enni Markkanen of the Institute of Pharmacology and Toxicology of the Vetsuisse Faculty of the University of Zurich.

Archived tissues are of great value to the research

The researchers analyzed the surrounding tissue of canine mammary tumors using molecular biology and immunohistological methods. To do this, they could access the tissue archive of the Institute of Veterinary Pathology located at the Animal Hospital. “With the permission of our patient’s owners, we conduct pathological tests to better understand diseases,” says animal pathologist Alexandra Malbon. “In the process, we archive samples of various organs and tissues as these samples can be of great value to answer future research questions.”

In the archived samples of mammary tumors from dog patients, Enni Markkanen and her team were able to prove that some cells in the vicinity of tumors behave the same way as the corresponding cells in humans: In the healthy tissue surrounding the tumor, substances are produced that promote tumor growth. “Simply speaking, the tumor enslaves its environment: It forces the surrounding cells to work for its benefit,” Markkanen adds. This mechanism works the same in both humans and dogs. For research on breast carcinoma, tumor tissue of dogs is therefore, among other reasons, much better suitable than tissue from rats or cells cultivated in the laboratory. “Importantly, however, we don’t view our dog patients as test subjects for cancer research,” Markkanen says. “But they can help us to better understand breast carcinoma in both dogs and humans and fight it more effectively.”

A PhD project at the Norwegian School of Veterinary Science has been studying the genetics behind mammary tumours in dogs.  Breast cancer is the most common form of cancer in female dogs.

A mammary tumour in a dog (Photo by Veronica Kristiansen)

Kaja Sverdrup Borge’s PhD project has led to the identification of genetic changes associated with these types of tumour.

Borge studied known risk genes in dogs to learn more about the genes that predispose dogs to canine mammary tumours. These genes are already known to be linked to cancer in humans. Borge discovered that there was a large variation in these genes from breed to breed. Some of the variants proved to have a detrimental effect and could lead to a potential change in the risk of developing cancer.

Borge examined canine mammary tumours in order to identify mutations which have arisen in tumours and may therefore be involved in the development of cancer. She focused on changes in the number of gene copies where there was either a decrease or increase in gene areas in the tumours.

She found a large number of mutations and the number of aberrations increased, the more malignant the tumours turned out to be. She detected major cancer genes known to occur in humans but also identified new areas. Borge also demonstrated that linking detailed histopathological parameters from mammary tumour diagnostics to genetic mutations could help to chart specific genes that lead to the growth of tumours and to more malignant types of cancer.

Increased knowledge about the genetic changes which cause cancer is essential for the prevention, diagnosis and treatment of the disease.  Because of the similarities between carcinogenic gene mutations in both canine and human breast cancer, studying breast cancer in dogs also has benefits for the study of breast cancer in humans.