Owners of herding breed dogs should be aware of their possible sensitivity to ivermectin, an active ingredient used in worming products for livestock and also in heartworm preventative drugs.  A genetic test is available to check for this sensitivity.

The Cummings School of Veterinary Medicine at Tufts University has recently published the story of Bristol, a 4-year-old Australian Shepherd, who presented with persistent seizures. 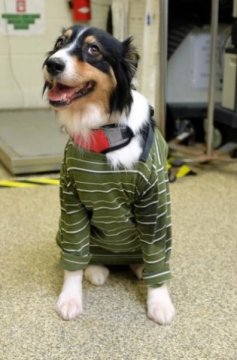 Bristol required immediate and aggressive care, including the assistance of a mechanical ventilator. She also underwent a brain MRI to rule out other causes of her condition. “It took a great amount of intervention, without which this condition would have been fatal,” said Dr. Terri O’Toole, D.V.M., one of a team of critical care specialists overseeing Bristol’s care.

Ivermectin toxicity is characterised by the chemical crossing the blood-brain barrier and causing neurological damage.

Although Bristol began to breathe on her own within 10 days, she remained unconscious for three weeks. Eventually, she began walking with the assistance of a cart and leg splints, and later began walking under her own power with support from hospital staff.

After a month of treatment, Bristol regained her normal personality traits and the ability to walk, eat and drink on her own.   She was in hospital for 40 days.

Tufts treats only one or two cases of ivermectin toxicity each year, and they are most frequently the result of accidents, such as when dogs are exposed to higher-dose ivermectin products intended for horses.

Although products containing ivermectin are typically safe and effective, many white-footed herding breed dogs like Bristol have a genetic mutation that makes them sensitive to it and several other drugs, including some common chemotherapy drugs. O’Toole recommends that owners have their herding breed dogs undergo a simple genetic test to determine if they have a mutation in the multidrug resistance (MDR1) gene.

“Getting the gene mutation test would enable them to know for sure if they could safely use some of these other drugs,” said O’Toole. “The kits are readily available through veterinarians, and they include a small brush that you use to take a swab of the inside of the dog’s mouth.” The swab is sent to a testing lab at Washington State University.

Many herding breed dog owners are aware of the risk and use alternative medicines, as was the case with Bristol’s owner. However, Bristol was exposed to ivermectin indirectly. While at a herding lesson, she ingested the feces of sheep that had recently been de-wormed with a product containing ivermectin.

O’Toole said the case highlights the need for owners to be vigilant when their dogs are in certain settings, such as on farms or in barns, where other animals might have been treated with high concentrations of ivermectin.