There is a form of cancer treatment called immunotherapy, where antibodies inhibit tumor growth.  Until now, such therapy wasn’t available for dogs.  A research team at Messerli Research Institute of the Vetmeduni Vienna, the Medical University of Vienna and the University of Vienna have now developed antibodies to treat cancer in dogs. 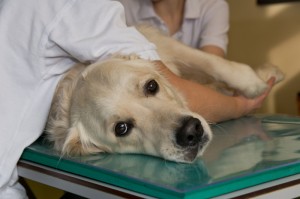 Since cancer cells bear very specific antigens on the surface, the corresponding antibodies bind to these molecules and inhibit tumor growth.  A destructive signal sent by the antibody to the inside of the cancer cell initiates its death. In a second mechanism, the immune system of the patient also destroys the “marked” tumor in a more efficient way.

Josef Singer and Judith Fazekas, both lead authors of the study, discovered that a receptor frequently found on human tumor cells (epidermal growth factor receptor or EGFR) is nearly 100 percent identical with the EGF receptor in dogs. In human medicine EGFR is frequently used as the target of cancer immunotherapy because many cancer cells bear this receptor on their surface. The so-called anti-EGFR antibody binds to cancer cells and thus triggers the destruction of the cells. “Due to the high similarity of the receptor in humans and dogs, this type of therapy should work well in dogs too,” the scientists say. The binding site of the antibody to EGFR in man and dogs differs only in respect of four amino acids.

The head of the study, Professor Erika Jensen-Jarolim, explains as follows: “We expect dogs to tolerate these anti-cancer antibodies well. This will be investigated in clinical studies in the future and is expected to greatly improve the treatment as well as the diagnosis of cancer in dogs.”

The newly developed antibody provides an additional benefit for dogs. As in human medicine, antibodies can be coupled with signal molecules. When the antibody binds to a cancer cell in the organism, the coupled antibody – in this case a radioactive isotope – can be rendered visible and is thus able to show where tumors and even metastases are located. When the selected isotope also contributes to the decay of cancer cells, the approach is known as “theranostics” (therapy and diagnostics).

In veterinary medicine, immunotherapy will be employed for the treatment of mammary ridge cancer (milk line cancer) in dogs. It may also be used as part of a combination therapy.

The team have published their study results in the journal Molecular Cancer Therapeutics.