For anyone interested in animal welfare, the story of the dogs rescued from Michael Vick’s Bad Newz Kennels is both sobering and encouraging.  Their rescue and the legal cases that followed were thoroughly documented in the New York Times bestseller, The Lost Dogs, by Jim Gorant.

In 2017, to mark the 10th anniversary of the bust which rescued the dogs, Gorant came back with this slim volume to update us on the stories of the dogs and people involved in the case.

Told simply and straightforwardly, the book opens on the property at 1915 Moonlight Road which is now the Good News Rehab Center for Chained and Penned Dogs.  In 2016, a ceremony at the property reunited many of the people involved in the case and the adopters with the dogs who had been saved.  51 dogwood trees were planted along with 51 plaques depicting the names of each of the dogs found at the property.  In some cases, the adopters were planting the trees for their dogs in memory, because by then many had already passed away.

Part II of the book is the longest part of the book; it’s an alphabetical list of each of the dogs by name and their story since being rescued.  Some are heartbreakingly short.   Other parts of the book update us on the key people involved in the bust and the legal case, and a discussion about what has changed in the last 10 years.

Much like the documentary film The Champions, the book couldn’t have been published too soon.  Many of the Vick dogs have passed, including cover girl Little Red whose story opened and closed The Champions.

Definitely worth reading and, if you are like me, adding to your ‘real’ dog book collection.  (I’m talking physical books, not Kindle files!)

And the last words go to Jim Gorant:  “As the dogs showed us – and continue to prove – accepting the state of things as they actually are and forging on in the face of those realities is the only way to make progress and create a new, better reality.”

A long wait for a new home (hopefully)

Today, I am sponsoring a community fundraiser by showing the award-winning documentary, The Champions. I’m looking forward to sharing the ground-breaking case and the work that has proved that bull breed dogs can be successfully rehabilitated and re-homed.

One of the things that the Vicktory dogs had in common with many dogs seized in enforcement matters is the long wait they endure in isolation kennels – and usually the dogs are destroyed once a conviction is secured.

Such is the case of Stella, a dog that was left in isolation without exercise for two years in the UK awaiting her owner’s day in court. 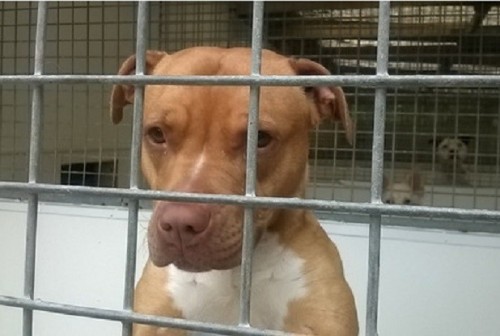 Stella the dog death row dog inside her 3ft x 9ft cage at the Foredowne Kennels in Kingskerswell, Devon. Stella was not exercised for two years. Photo courtesy of The Plymouth Herald

Stella’s owner used her to attack police and Stella paid the price by being labelled a dangerous dog.

The police have now given their blessing for Stella to be re-homed, after her previous owner relinquished all rights to her.

And they have defended their need to hold Stella in isolation, saying it’s the system’s fault…“Devon and Cornwall Police has on a number of occasions shared its concerns at the lengthy delay to cases, caused by legislation, the court system and on occasions the unfit owners surrounding the issue of dangerous dogs.”

You can read more about Stella’s case here, in The Herald. And in this previous item which put pressure on officials to address her living conditions.

There’s still much work to be done to ensure that dogs are not collateral damage in cases of cruelty and dangerous owners.

For Stella, at least, there seems to be a happy ending after a long wait.