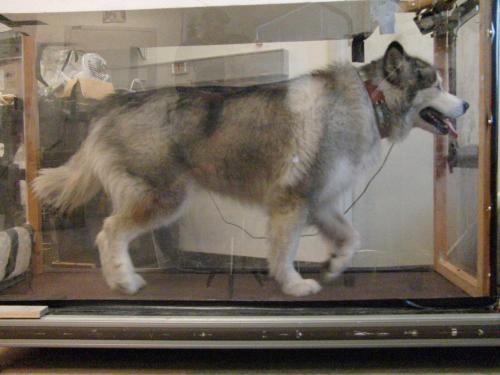 Kida, a 110-pound Alaskan malamute, runs on a treadmill in Terrie Williams’ lab at UC Santa Cruz. Dogs are better adapted for endurance exercise than cats, and humans are more like dogs in that respect.
Photo credit: Caleb Bryce, UCSC

For over 30 years, Terrie Williams has been studying exercise physiology in wild animals: African lions and wild dogs, dolphins and whales, coyotes and mountain lions, as well as a few human athletes.

These studies have given Williams, a professor of ecology and evolutionary biology at UC  (University of California) Santa Cruz, a unique perspective on exercise and health, which she presents in an article titled “The Healthy Heart: Lessons from Nature’s Elite Athletes,” published in the September 2015 issue of the journal Physiology.

In the course of her research, Williams has found that dogs and cats are opposites in terms of aerobic capacity and maximum heart rate, and humans are more like dogs, adapted for endurance exercise (chasing down prey), while cats are built for the short bursts of speed used in stalk-and-pounce hunting. This difference is reflected in heart size relative to total body mass (larger hearts in dogs and humans, smaller hearts in cats).

Heart disease is exceedingly rare in wild animals, but it is the leading cause of death in humans worldwide. There are many plausible explanations for this, but one factor stands out above all others: the difference in daily activity levels. “We just don’t ask our hearts to do very much on a daily basis,” Williams said.

For Williams, the main reason to study exercise physiology in animals is to better understand how much energy they have to expend to live in their environments, and how they might be affected by environmental changes and human activities.