The underlying cause of canine diabetes

In a new effort, researchers from the University of Pennsylvania and Baylor College of Medicine have used advanced imaging technology to fill in details about the underlying cause of canine diabetes, which until now has been little understood. For the first time, they’ve precisely quantified the dramatic loss of insulin-producing beta cells in dogs with the disease and compared it to the loss observed in people with type 1 diabetes. 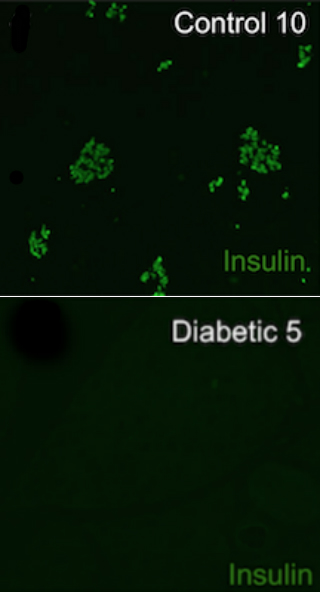 “The architecture of the canine pancreas has never been studied in the detail that we have done in this paper,” said Rebecka Hess, professor of internal medicine at Penn’s School of Veterinary Medicine and an author on the study.

Despite important differences between the disease in dogs and humans, the study also identified key similarities that suggest investigating diabetes in dogs may yield valuable insights into treating humans.

The research was led by Emily Shields, currently a graduate student in Penn’s Perelman School of Medicine, who completed much of the work as a high school and then college student in labs at Penn and Baylor.

The study was published in PLOS ONE.

Canine diabetes can be managed with insulin, similar to type 1 diabetes in humans. But, unlike the human version of the disease, dogs typically develop diabetes in middle or old age, while people with type 1 diabetes are typically diagnosed during childhood. In addition, while type 1 diabetes is known to be an autoimmune condition, researchers haven’t found conclusive evidence that the same is true in dogs.

To learn more about the factors that contribute to canine diabetes, the researchers made use of a repository of donated tissue samples from dogs — 23 with diabetes and 17 without — who had been treated at Penn Vet’s Ryan Hospital.

The team used robotic microscopes that can rapidly move around a slide taking images of pancreas tissue samples, which were analyzed by computer to determine the contents.

They found that beta cells dropped off in dramatic fashion in diabetic dogs, reduced 13-fold compared to non-diabetic animals. They also found that non-diabetic canine islets contained a large percentage of beta cells, comprising about 80 percent of endocrine cells. In contrast, beta cells comprise slightly more than 50 percent of endocrine cells in non-diabetic human islets. The researchers noted that this may mean that dogs need to lose more beta cells before experiencing symptoms of diabetes. The observation could explain why dogs develop a form of diabetes that is similar to type 1 diabetes, but do so later in life, compared to humans.

They also identified features of the islets and pancreatic structures that were different in dogs than in humans.

“In sharp contrast to human diabetes, in which there are a lot of islets still present but none contains insulin, we found in dogs that only a few beta cells were present and the islets were incredibly small,” Kushner said.

While the researchers had hoped to be able to visualize immune cells infiltrating the pancreas and attacking beta cells, they failed to do so.  While other signs point to canine diabetes being an autoimmune condition, this study did not find a “smoking gun.”

Though the work highlights differences between canine and human diabetes, it also points to a number of similarities that distinguish the two from diabetes in rodents, which are often used as models to study the disease.

For example, the scientists observed that dogs’ beta cells were distributed throughout the islets, as beta cells in humans are. In rodents, beta cells are concentrated in the center of the islet.

“Now that we know more about the disease in dogs and in particular how they are similar to humans in ways that rodents are not, it makes them more appealing as a model,” Kushner said.

At Penn, Hess is currently working to look for genetic markers in dogs that heighten a dog’s risk of developing diabetes.

“My hope is that with genetic screening we can eventually identify pre-clinical diabetic dogs, potentially making breeding recommendations that could decrease the incidence and prevalence of the disease in dogs,” Hess said.

This entry was posted in dog care, Dogs and tagged Baylor College of Medicine, diabetes, insulin, PLoS ONE, University of Pennsylvania. Bookmark the permalink.