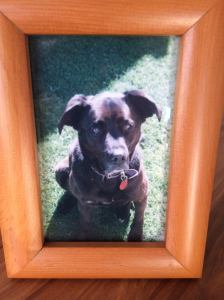 This is Ebony; she was a Chocolate Labrador cross – a deep dark chocolate in colour (not milk chocolate like many Labs).  She was my best friend from 1998, when I adopted her via Dogwatch which facilitated a private adoption, to October 2003, when she suddenly succumbed to cancer of the liver and pancreas.

Ebony was highly reactive to sounds and, particularly, fireworks.  So I think of her a lot around Guy Fawkes celebrations each year.

Each year, I’d go to the vet for a prescription for sedatives and then for many nights around the official celebration, I would have to try to dose her before any fireworks started.  This was easier said than done.  As many of us know, people sometimes set off fireworks even before darkness has fallen.  The label recommended intake within 1 hour before any stimulus…

Most of the time, sedatives weren’t enough.  Copious amounts of Rescue Remedy in her water bowl and sprayed around the house didn’t seem to help much, either.  Ebony would run and pace the house, hyperventilating and salivating.  It was heartbreaking to watch.  Sometimes, I would turn the radio on in the car, which was parked in the garage, and I’d put her in the back seat (as usual) with me in the front pretending that any minute we would be going out for a ride.  But in reality, I was just trying to get as many layers of sound-proofing between us and the fireworks that I could.

Ebony wasn’t fooled, although sometimes our car trips to nowhere did help alleviate some of the sounds.

The bottom line was that when Ebony was over-threshold with fear, there wasn’t much that could be done until the fireworks stopped.

One year, we were woken from a sound sleep when someone decided to light off fireworks.  It was late by our standards, past 10 pm when most families and working people would not be up lighting fireworks on a work night.

Ebony was immediately over-threshold, barking and pacing.  And then she lost control of her bowels in our bed.  She was doubly stressed by this, and I had to strip the bed and put everything in the washing machine and re-make the bed with fresh linens.

Another year, Ebony barked so badly that she suffered a rectal prolapse.  She had literally barked herself inside/out; part of her rectum had come out of the anus.   It was incredibly upsetting for the both of us and I knew she was in pain and discomfort, too.  The vet was able to lubricate the tissue and help replace it back inside and I had to feed a low-irritant food to her for a week to ensure that we gave the area a chance to rest.

I clearly remember after this incident how much noise her digestive system made – gurgling – for days.  Looking back, I’m sure that the stress and digestive upsets she endured because of fireworks had something to do with her succumbing to liver and pancreatic cancer – before she even reached aged 10.

So you might wonder why I’m so passionate about the banning of the private sale of fireworks and now you know.  They hurt my dog many times over and when you hurt my dog, I’m unlikely to forget.

One response to “Ebony’s story”