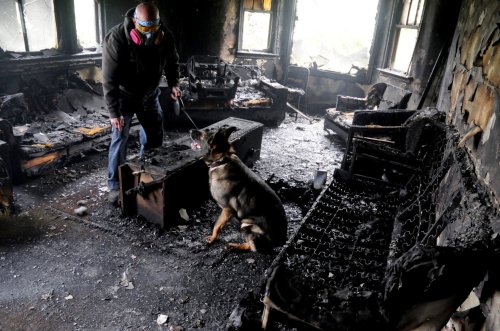 Eza waiting for her handler, Jeff Lunder, to initiate a search of a residential structure fire to check for any indication of ignitable liquid. Photo credit: Joe Towers

Trained dogs can detect fire accelerants such as gasoline in quantities as small as one billionth of a teaspoon, according to new research by University of Alberta chemists. The study provides the lowest estimate of the limit of sensitivity of dogs’ noses and has implications for arson investigations.

“During an arson investigation, a dog may be used to identify debris that contains traces of ignitable liquids—which could support a hypothesis that a fire was the result of arson,” explained Robin Abel, graduate student in the Department of Chemistry and lead author of the study. “Of course, a dog cannot give testimony in court, so debris from where the dog indicated must be taken back to the laboratory and analyzed. This estimate provides a target for forensic labs when processing evidence flagged by detection dogs at sites of potential arson.”

The study involved two dog-and-handler teams. The first was trained to detect a variety of ignitable liquids, while the other was trained primarily with gasoline. Results show that the dog trained on a variety of liquids performed well detecting all accelerants, while the dog trained on gasoline was not able to generalize to other accelerants at extremely low concentrations.

Another outcome of the study was the development of a protocol that can be used to generate suitable ultra-clean substrates necessary for assessing the performance of accelerant-detection dogs for trace-level detection.

“In this field, it is well-known that dogs are more sensitive than conventional laboratory tests,” said James Harynuk, associate professor of chemistry and Abel’s supervisor. “There have been many cases where a dog will flag debris that then tests negative in the lab. In order for us to improve laboratory techniques so that they can match the performance of the dogs, we must first assess the dogs. This work gives us a very challenging target to meet for our laboratory methods.”

So, just how small a volume of gasoline can a dog detect?

“The dogs in this study were able to detect down to one billionth of a teaspoon—or 5 pL—of gasoline,” added Harynuk. “Their noses are incredibly sensitive.”

This research was conducted in collaboration with Jeff Lunder, vice president of the Canine Accelerant Detection Association (CADA) Fire Dogs. Funding was provided by the Natural Sciences and Engineering Research Council of Canada (NSERC).

The paper, “A novel protocol for producing low-abundance targets to characterize the sensitivity limits of ignitable liquid detection canines,” was published in Forensic Chemistry (doi: 10.1016/j.forc.2020.100230).

This entry was posted in Dogs, research, special dogs and awards and tagged accelerants, forensics. Bookmark the permalink.