Eza waiting for her handler, Jeff Lunder, to initiate a search of a residential structure fire to check for any indication of ignitable liquid. Photo credit: Joe Towers

Trained dogs can detect fire accelerants such as gasoline in quantities as small as one billionth of a teaspoon, according to new research by University of Alberta chemists. The study provides the lowest estimate of the limit of sensitivity of dogs’ noses and has implications for arson investigations.

“During an arson investigation, a dog may be used to identify debris that contains traces of ignitable liquids—which could support a hypothesis that a fire was the result of arson,” explained Robin Abel, graduate student in the Department of Chemistry and lead author of the study. “Of course, a dog cannot give testimony in court, so debris from where the dog indicated must be taken back to the laboratory and analyzed. This estimate provides a target for forensic labs when processing evidence flagged by detection dogs at sites of potential arson.”

The study involved two dog-and-handler teams. The first was trained to detect a variety of ignitable liquids, while the other was trained primarily with gasoline. Results show that the dog trained on a variety of liquids performed well detecting all accelerants, while the dog trained on gasoline was not able to generalize to other accelerants at extremely low concentrations.

Another outcome of the study was the development of a protocol that can be used to generate suitable ultra-clean substrates necessary for assessing the performance of accelerant-detection dogs for trace-level detection.

“In this field, it is well-known that dogs are more sensitive than conventional laboratory tests,” said James Harynuk, associate professor of chemistry and Abel’s supervisor. “There have been many cases where a dog will flag debris that then tests negative in the lab. In order for us to improve laboratory techniques so that they can match the performance of the dogs, we must first assess the dogs. This work gives us a very challenging target to meet for our laboratory methods.”

So, just how small a volume of gasoline can a dog detect?

“The dogs in this study were able to detect down to one billionth of a teaspoon—or 5 pL—of gasoline,” added Harynuk. “Their noses are incredibly sensitive.”

This research was conducted in collaboration with Jeff Lunder, vice president of the Canine Accelerant Detection Association (CADA) Fire Dogs. Funding was provided by the Natural Sciences and Engineering Research Council of Canada (NSERC).

The paper, “A novel protocol for producing low-abundance targets to characterize the sensitivity limits of ignitable liquid detection canines,” was published in Forensic Chemistry (doi: 10.1016/j.forc.2020.100230).

A team of scientists has provided the first evidence that dogs can learn to categorise odours and apply this to scents they have never encountered before.

The research reveals how the animals process odour information and is likely to have a profound impact on how we train sniffer dogs. 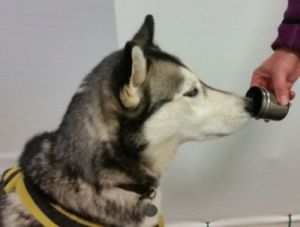 Training a sniffer dog (photo courtesy of University of Lincoln)

As humans, we do not have to experience the smell of every fish to know that it smells ‘fishy’; instead we use our previous experience of fish and categorise the new smell in the correct way. The new research, published in the journal Scientific Reports, reveals that dogs can do the same.

Researchers separated dogs into two groups and then trained them to respond to 40 different olfactory stimuli – or smells – half of which were accelerant-based. The dogs in the experimental group were trained (through a reward) to offer a behavioural response, for example “sit”, when they were presented with smells which fit a specific category, but to withhold that response for other non-category stimuli. The remaining dogs were trained on the same stimuli but were not rewarded for the categorical variable.

The researchers found that only the dogs in the category group were able to learn the task. Even more significantly, when presented with completely unknown smells, the dogs were able to place them in the correct category and to remember the odours six weeks later.

The researchers concluded that this means that dogs can apply information from previous experience to novel – or new – scents in order to apply an appropriate response.

Dr Anna Wilkinson from the School of Life Sciences at the University of Lincoln said: “As humans, we are very good at assigning different things to different categories; for example, we know something is a chair because there are identifiable aspects such as a flat space to sit on, or four legs. Categorising odours works the same way, and we were keen to discover whether dogs would be able to learn those skills.

“This was an extremely hard task for the dogs as the odour stimuli varied in strength, so animals were never trained on exactly the same stimulus. As such, it is even more impressive that the experimental group dogs learned and retained the information.

“These findings add substantially to our understanding of how animals process olfactory information and suggest that use of this method may improve performance of working animals.”

The findings have implications in the field of working dog training as it implies that it may be possible to improve the way we train detection dogs.

The winning design features a firefighter looking upon his detection dog, who is ready for duty

The non-profit organisation National Fire Dog Monument has been successful in its fundraising to build a monument to Certified Accelerant Detection Dogs.  The bronze statue is entitled “From Ashes to Answers” and will be permanently displayed in front of a fire station in Washington, DC.

The inspiration for the dog in the sculpture is Erin, Colorado’s first arson dog who died from cancer.

As the statue is transported to its final home, there will be a roadshow from June 21 to 28, 2012 stopping in 12 cities starting in Denver, Colorado and ending in Washington, with other stops in Kansas, Illinois, Missouri, Indiana, Pennsylvania, New Jersey and New York.   The full schedule of stops  can be found here.

Arson dogs are trained to detect hydrocarbons and other accelerants that are used to deliberately light fires.  The use of dogs in this service is yet another way that working dogs are used to benefit communities and the new monument is a fitting tribute to their contribution.