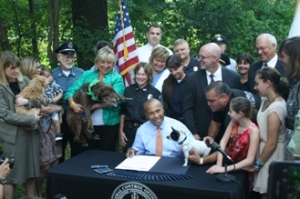 The law will also create some statewide oversight for animal control, which previously did not exist in the state; creates categories for kennel licensing; creates consistency in the holding time for stray dogs and provide other meaningful updates to the state’s antiquated animal control laws.  An amendment to the bill also added some restrictions on the tethering of dogs.

This new law will not cost money, it will actually minimize costs to cities and towns by reducing the number of homeless animals and the associated cost to house and take care of them. In addition, ensuring that animal control officers are trained, and improving the dangerous dog law to protect public safety, will provide indirect cost savings.

Best of all, this bill proves that animal welfare agencies can work together.  The bill was drafted as a collaboration between the Animal Control Officers Association of Massachusetts (ACOAM), the Massachusetts Society for the Prevention of Cruelty to Animals (MSPCA), the Animal Rescue League of Boston, the state’s Bureau of Animal Health within the Department of Agricultural Resources and the Massachusetts Veterinary Medical Association (MVMA).