Last week, a new review report into the greyhound racing industry in New Zealand was released. As most of you know, greyhound welfare is a topic near and dear to my heart because Izzy is an ex-racer.

This review, by the Hon Sir Bruce Robertson, is not the first review of the industry. It’s not even the second (but the second, known as the Hansen report was a whopping 93 pages. I discussed that earlier report in my blog post How many hounds needing a home?). The 2021 review is the third review of greyhound racing in this country.

So the report made some headlines last week in the news because the Minister of Racing, Grant Robertson, says he’s putting the industry ‘on notice.’ Frustratingly, none of the mainstream news sources provided a link to a copy of the actual report. Being the information geek that I am, I tracked down the report and read it thoroughly over the weekend – with highlighter pen in hand.

Before I go into some of the key findings, you should be aware that a major reason why this review was undertaken is that Greyhound Racing NZ (GRNZ) wrote to the Minister for Racing in June 2020 stating that all 20 recommendations stated in the Hansen review had been successfully implemented and so they would no longer be providing progress reports. The National Animal Welfare Advisory Committee felt that the information provided was insufficient and, with more deaths and injuries of greyhounds on the track, this review was commissioned.

I like this review, for one reason because it is PITHY. 19 pages including the appendices, it gets straight to the heart of the matter.

It has become clear that no matter the outcome of this report, or any reports henceforth, the social license of the industry will continue to be challenged for the foreseeable future. If GRNZ wishes to secure a future for the industry it governs, then it must set out to demonstrate the decency of the greyhound racing industry at every possible opportunity.

GRNZ has made its job harder by unnecessarily obfuscating information and pushing back against those with an interest. All information should be recorded, and it should be available. Arguably GRNZ has data to support its stances on the issues raisedin this report but is seen as unwilling to share this.

For those of you who have an interest, I encourage you to read the report in its entirety and share it with others. The current NZ Government says the industry is on notice and must report by the end of 2022 on its actions in response.

My view is that greyhound racing has been banned in many countries because of the animal welfare considerations. New Zealanders must ask themselves why those animal welfare issues don’t exist here. Because clearly this review has found that they do.

Is your dog an optimist or a pessimist?

Dogs can have either an optimistic or a pessimistic view of the world, new research shows.  The approach used in the research will have uses in assessing animal welfare generally, but also in assessing suitability of dogs for various working roles.

“This research is exciting because it measures positive and negative emotional states in dogs objectively and non-invasively (important for those concerned about animal welfare in research),” said Dr Melissa Starling, from the University of Sydney’s Faculty of Veterinary Science.

Dr Starling has been working with Assistance Dogs Australia to investigate whether measuring optimism would assist in selecting dogs for training.

Dogs were taught to associate two different sounds (two octaves apart) with whether they would get the preferred reward of milk or instead get the same amount of water. Once the dogs learned the discrimination task, they were presented with ‘ambiguous’ tones.

If dogs responded after ambiguous tones, it showed that they expect good things will happen to them, and they are called ‘optimistic.’ They can show how optimistic they are by which tones they respond to. A very optimistic dog may even respond to tones that sound more like those played before water was offered.

“Of the dogs we tested we found more were optimistic than pessimistic but it is too early to say if that is true of the general dog population,” said Dr Starling.

“This research could help working dog trainers select dogs best suited to working roles. If we knew how optimistic or pessimistic the best candidates for a working role are, we could test dogs’ optimism early and identify good candidates for training for that role. A pessimistic dog that avoids risks would be better as a guide dog while an optimistic, persistent dog would be more suited to detecting drugs or explosives.”

Dr Starling talks more about her research in this video:

Dogs are people, too

In this New York Times opinion piece, Professor Gregory Berns discusses the MRI findings of brain activity in dogs, the evidence for ‘sentience’ and the reasons why dogs’ rights should go beyond consideration of animals as property.

For anyone involved in animal welfare advocacy, it is essential to have animal welfare laws that recognise dogs as sentient beings – with the ability to experience emotions like love and grief – because abuse and harm done to sentient beings carries a higher penalty in law than if an item of property is damaged.  (In many areas, dogs are considered nothing more than property.) 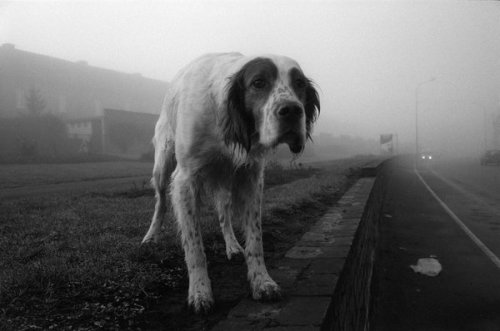 On the third Saturday of August each year, organisations band together to raise awareness about pet overpopulation.  This year is the 21st year of the initiative!

If you are thinking of adding a dog to your household (or another dog), please adopt from a shelter or rescue organisation.  And spay/neuter your pet to avoid adding to the pet population in your area.

Many of us are ‘animal people’ who are concerned about animal welfare in general and not just the health and well-being of our dogs.  When it comes to the products we buy, we’d like to choose ethical products – products that haven’t been tested on animals.

Here in New Zealand, you can download a copy of the SAFE Shopping Guide to help you make the right purchasing decisions.

SAFE is a non-profit charitable organisation financed solely through donations.  It is dedicated to changing attitudes and nurturing compassionate values by educating the public about the inherent value of animals.

SAFE has been working in New Zealand for 75 years and so they know their stuff.  Visit the SAFE website here.

No pets left behind – pet disaster planning in San Francisco

The City of San Francisco is providing leadership in the area of disaster planning for pets.  Following the disaster of Hurricane Katrina in 2005, when  pet owners were refused shelter if they brought their pets with them, the Pets Evacuation and Transportation Standards Act of 2006 made federal funding available for authorities to plan to help companion animals that are affected by disasters.

In San Francisco,  pet-disaster responders will have authorised training and they will use a network of 125 temporary shelters to evacuate animals.  Injured animals will be treated in a $300,000 mobile animal disaster medical command unit (funding for this is still pending).

Best of all, the city’s department of Animal Care and Control has a No Pets Left Behind policy.  Whenever a citizen is rescued, their pets will be rescued too.

For those of us who have lived through a major disaster like Christchurch’s 2010 and 2011 earthquakes, we know the importance of having supplies and an evacuation plan for your pets.  It’s also a challenge to get authorities coordinated to respond to animal welfare problems during major events.

What is a no kill shelter?

As the name suggests, a no kill animal shelter is one where all adoptable animals are allowed to live until they are found a forever, loving home.  Only severely ill animals, or those that are truly determined to be dangerous and unadoptable, are euthanised.

The concept of ‘no kill’ has challenged the animal welfare sector as far back as the 1970s.  An article by Ed Duvin in 1989 in a publication called animalines is reputed to have been a major turning point.  The article characterised the animal welfare sector as a ‘slumbering giant’ and pointed to the need for a coordinated national effort with a greater focus on education and the valuing of each animal’s life.  It challenged the sector to stop killing animals in the name of mercy.

You can read a reprint of that article here.

I have just had the pleasure of working at the Best Friends Animal Society sanctuary in Kanab, Utah.  This is an inspiring leader in the no kill movement and I look forward to bringing you more news about Best Friends and animal welfare in future blog postings.

As my readers know, I don’t make product endorsements very often.  But, I had to share the great dog photography of Ron Schmidt with my readers.

I discovered Ron’s work last year when I purchased a calendar, Dogma – A Dog’s Guide to Life.  I loved the combination of dog photos and dog-inspired proverbs.  I have purchased another Dogma calendar for this year!

Ron trained in photography and worked with fashion and celebrity photographers for years before branching out into commercial photography on his own in 1999.  A holiday card developed for friends and relatives that featured the family dog carrying a Christmas tree quickly morphed into a career in dog photography.  Ron and his wife launched Loose Leashes in 2005 and they donate a portion of the proceeds from sales of prints to animal welfare causes (another reason to like them!)

I won’t break any of Ron’s copyright by attempting to copy his photography on this blog – but check out Loose Leashes today!

Homeless dogs in paradise – a visit to the Maui Humane Society

Whenever I travel, I like to do research on dogs and dog welfare issues.  I was on Maui last week and took a trip out to visit the Maui Humane Society.  I’m very glad I did. 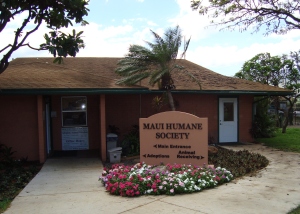 The Humane Society is a very busy place  set on beautiful grounds adorned by tropical flowers.    In the reception area is a notice board complete with photos and details of animals that have successfully found their forever homes after a stay at the shelter.

Jocelyn Bouchard, who  is the Chief Executive Officer of the Society, told me that the Society employs two full time adoption counselors who promote adoptions, provide counseling and support to potential adopters before, during and after adoption, and coordinate transfers.

The Society transports pets off island, out of state and internationally and works with adopters and transport agencies to make this happen.   For the ten months of this financial year (July through to end of April), 832 dogs have been adopted and another 63 have been transferred. In the fiscal year the ended June 30 2010, the Society adopted a total of 911 dogs, transferring a total of 33.

Holiday makers often visit the Society’s shelter, and adoptions to California and other west coast (USA) locations are fairly common.   The most common international designation for pets is Canada.  Pets have been transferred as far as Indonesia and Germany, too!

The Society spends an average of $255 on every animal in its care.

The kennel area was full on the day of my visit.   Dogs are photographed with flower leis around their neck to add a unique Hawaiian touch.

The Society is a no-kill shelter and has no time limit for keeping animals.  Adoption information on the kennel signs tell you how long the animal has been in the Society’s care.  Adoption fees range from a high of $125 for puppies under the age of 6 months, $100 for dogs over the age of 6 months, and $55 for dogs over the age of 7 years.
You can find the Society’s headquarters at 1350 Mehameha Loop in Pu’unene.  Visiting hours are 10 am -4 pm, Monday through Saturday,  and 12 to 4 on Sundays.