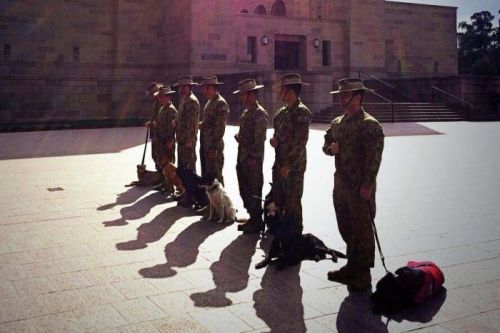 Soldiers with their dogs stand at the Australian War Memorial (photo by Siobhan Heanue, ABC)

On the eve of Anzac Day, here’s a special story about service animals honoured recently at the Australiam War Memorial.

Tomorrow is Anzac Day, a public holiday throughout New Zealand and Australia.  Last year, I wrote about Caesar the Anzac Dog.  This year, it is Sergeant Stubby.  Although not from New Zealand or Australia, this dog embodies the spirit and companionship that were hallmarks of WWI. 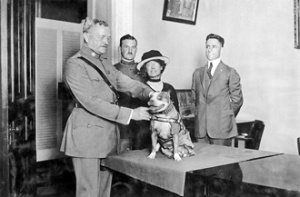 Stubby, as he was named (for his short tail), became New England’s most decorated canine war hero.

By February 1918, Stubby was experiencing the battlegrounds of France.  He would leave the trenches and go into the dangerous “no man’s land” of exploding mines, barbed wire and bomb craters to find, comfort and lead rescuers to missing or wounded soldiers.   Once he experienced mustard gas, he was a keen gas detector and warned his fellow soldiers when gas attacks were imminent.

During the Battle of the Argonne, he helped to capture an enemy spy. Official accounts note that Stubby leaped from the safety of the trench, bit a previously undetected intruder on the seat of his pants and held him there until the alarmed German was disarmed.

Grateful residents sewed Stubby a chamois blanket that became his uniform. On it were embroidered the flags of The Allies, three chevrons indicating the rank of sergeant and a fourth “wounded chevron” which he received for injuries suffered in a grenade attack. Service medals for action at Verdun, St. Mihiel and Chateau Theirry and Meuse-Argonne were later pinned to his blanket. It now sits with his stuffed remains at the Smithsonian in Washington D.C. 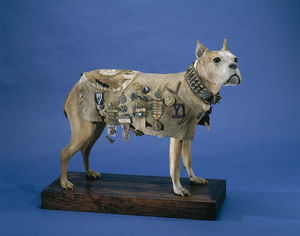 Stubby, including his coat, are on display at the Smithsonian in Washington DC.

Stubby survived the war and returned to the United States with Robert Conroy.  When Conroy enrolled at Georgetown University to study law, Stubby became a mascot to the local team, the Hoyas.  The pair also visited the White House and were featured in numerous parades.  When he died in 1926,  Stubby’s obituary was published in many newspapers.

Today around New Zealand, people have stopped their daily activities to commemorate another Anzac Day.

Did you know that New Zealand has its own special dog hero from World War I?  His name was Caesar.

A Bulldog, Caesar led the grand parade down Auckland’s Queen Street as the NZ Rifle Brigade left for the war.  Caesar was trained as a Red Cross dog and worked at the Battle of the Somme in 1916.  Dogs were particularly valuable to rescuers in No Man’s Land, as they helped to locate wounded men at night.

Caesar was killed in action.  His collar (which has his name spelled incorrectly) is on display at the Auckland War Memorial Museum. 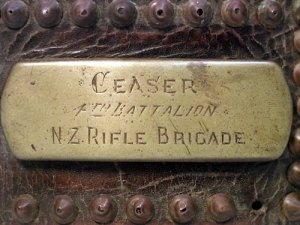 Author Patricia Stroud has written about Caesar in her book, Caesar the Anzac Dog.  Illustrated by Bruce Potter and published by Harper Collins, the book is useful for teaching schoolchildren about the war.  The publisher also offers a study guide for teachers.