Today around New Zealand, people have stopped their daily activities to commemorate another Anzac Day.

Did you know that New Zealand has its own special dog hero from World War I?  His name was Caesar.

A Bulldog, Caesar led the grand parade down Auckland’s Queen Street as the NZ Rifle Brigade left for the war.  Caesar was trained as a Red Cross dog and worked at the Battle of the Somme in 1916.  Dogs were particularly valuable to rescuers in No Man’s Land, as they helped to locate wounded men at night.

Caesar was killed in action.  His collar (which has his name spelled incorrectly) is on display at the Auckland War Memorial Museum.

Author Patricia Stroud has written about Caesar in her book, Caesar the Anzac Dog.  Illustrated by Bruce Potter and published by Harper Collins, the book is useful for teaching schoolchildren about the war.  The publisher also offers a study guide for teachers. 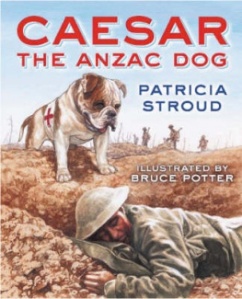