Professor Gregory Berns of Emory University is at it again.  He’s expanded on his earlier research using functional MRI (magnetic resonance imaging) to show the brain activity in dogs.

“Now we’ve shown that the initial study wasn’t a fluke: Canine fMRI is reliable and can be done with minimal stress to the dogs. We have laid the foundation for exploring the neural biology and cognitive processes of man’s best, and oldest, friend.”  said Professor Berns. 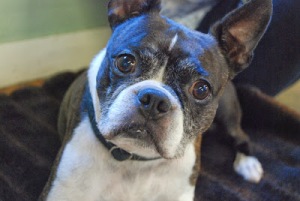 Tigger, a Boston Terrier, was one of the 13 study subjects

The task requires dogs to cooperatively enter the small enclosure of the fMRI scanner and remain completely motionless despite the noise and vibration of the machine.  Only those dogs that willingly cooperated were involved in the experiments.

Most of the dogs showed a response in the caudate region of the brain when seeing the hand signal for a treat.  This area of the brain has the highest concentration of dopamine receptors, which are implicated in motivation and pleasure, among other neurological processes.

“Our goal is to map out canine cognitive processes” said Berns. The research team needs to increase the number of canine subjects that can be trained to stay within the MRI machine so it can validate its research.

See my other blogs about functional MRI and Professor Gregory Berns:

Your dog understands ‘Just Do It’

New research helps to confirm the cognitive abilities of our dogs.

Claudia Fugazza and Adám Miklósi, from Eötvös Loránd University in Hungary have shown that dogs can learn, retain and replay actions taught by humans after a short delay.   Because the dogs were able to undertake the actions after a delay (during which they were purposely distracted), the research proves that dogs have an ability to ‘encode’ and ‘recall.’

The study involved eight adult pet dogs who were trained by their owners with the ‘Do as I do’ method and then made to wait for short intervals (5-30 seconds) before they were allowed to copy the observed human action, for example walk around a bucket or ring a bell.

The researchers observed whether the dogs were able to imitate human actions after delays ranging from 40 seconds to 10 minutes, during which time the dogs were distracted by being encouraged to take part in other activities. The researchers were looking for evidence of the dogs’ ability to encode and recall the demonstrated action after an interval.

Because dogs were able to reproduce the novel actions after a delay and without earlier practice, the researchers believe that dogs have a specific type of long-term memory capability – called ‘declarative memory.’    These are memories involving facts or knowledge which can be consciously recalled.

This study is published in the journal Animal Cognition.