One in four dogs at Crufts is overweight

One in four dogs competing in the world’s largest canine show (Crufts) is overweight, despite the perception that entrants are supposed to represent ideal specimens of their breed, reveals research published online in Veterinary Record.

The widespread dissemination of show dog images online may be ‘normalising’ obesity in dogs, now recognised to be a common canine disorder, say the researchers.

As in people, obesity in dogs has been linked to orthopaedic problems, diabetes, respiratory disease, and certain types of cancer. It also affects both the quality and length of a dog’s life.

The researchers base their findings on 1120 online images of dogs from 28 breeds—half of which are prone to obesity–that had appeared at Crufts. This is the UK’s national dog show, and the largest of its kind in the world.

Only adult dogs that had been placed between first and fifth in their class between 2001 and 2013 were included in the study.

The images were coded and anonymised, and 960 were suitable for assessment. A second person then graded the body condition of each dog in one sitting, using a previously validated method.

Pugs, basset hounds, and Labrador retrievers were the breeds most likely to be assessed as being overweight. Dogs were overweight in 80% of the pug images, and in around two thirds of the basset hound (68%) and Labrador (63%) images. 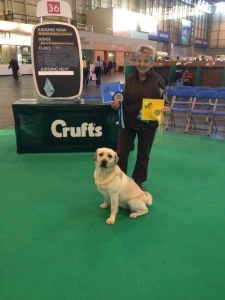 The researchers say Labradors were one breed that was more likely to be assessed as overweight. (Photo by http://www.pedigreelabrador.co.uk)

The three breeds with the highest prevalence of overweight among the online images are prone to excess weight. But, given that pugs were originally bred to be a companion dog, while hounds and Labradors were bred, respectively, for hunting and fieldwork, being overweight would not be advantageous, say the researchers.

The researchers point out that the prevalence of overweight among the show dogs was less than that reported generally for pet dogs in the UK. But the fact that “a quarter were above ideal weight is still a cause for concern,” they write.

“These dogs showcase the ideal characteristics of the pedigree breed, and there is a danger that widespread media exposure might adversely influence owner perception of optimal body shape,” they say.

The Kennel Club has recently introduced changes in policy for judging criteria, to emphasise characteristics that promote good health in dogs, say the researchers.

But breed standards of optimal condition should be reinforced for competition, to ensure consistency, they say, concluding: “Further effort is now required to educate owners, breeders and show judges so that they can all better recognise overweight condition, thus helping to prevent the development of obesity.”