Brain scans of canine candidates to assist people with disabilities can help predict which dogs will fail a rigorous service training program, a study by Emory University finds.

The journal Scientific Reports published the results of the study, involving 43 dogs who underwent service training at Canine Companions for Independence (CCI) in Santa Rosa, California.

Some of the service dog trainees that were involved in the study pose with an fMRI scanner. (Photo by Gregory Berns.)

“Data from functional magnetic resonance imaging (fMRI) provided a modest, but significant, improvement in the ability to identify dogs that were poor candidates,” says Emory neuroscientist Gregory Berns, who led the research. “What the brain imaging tells us is not just which dogs are more likely to fail, but why.”

All of the dogs in the study underwent a battery of behavioral tests showing that they had a calm temperament before being selected for training. Despite calm exteriors, however, some of the dogs showed higher activity in the amygdala – an area of the brain associated with excitability. These dogs were more likely to fail the training program.

“The brain scans may be like taking a dog’s mental temperature,” Berns says. “You could think of it as a medical test with a normal range for a service dog. And the heightened neural activity that we see in the amygdala of some dogs may be outside of that range, indicating an abnormal value for a successful service dog.”

The findings are important, he adds, since the cost of training a service dog ranges from $20,000 to $50,000. As many as 70 percent of the animals that start a six-to-nine-month training program have to be released for behavioral reasons.

“There are long waiting lists for service dogs, and the training is lengthy and expensive,” Berns says. “So the goal is to find more accurate ways to eliminate unsuitable dogs earlier in the process.”

The study found that fMRI boosted the ability to identify dogs that would ultimately fail to 67 percent, up from about 47 percent without the use of fMRI.

“This type of approach is not going to be feasible for individual trainers and their dogs because of the expense of fMRI,” Berns says. “It would only be practical for organizations that train large numbers of dogs every year.”

CCI is a non-profit that breeds, raises and trains dogs to assist human partners. Its service dog program, designed for disabled people, provides dogs to do tasks such as turn on lights, pick up dropped keys, open a door and pull a manual wheelchair.

Golden retrievers, Labradors — or crosses between the two — are the usual CCI service dog breeds, due to their generally calm and affable natures. After the puppies are weaned, they are adopted by volunteer puppy raisers for 15 months, before returning to CCI to undergo behavioral tests. Those that pass begin training.

For the Scientific Reports paper, the researchers taught the dogs how to remain still while undergoing an fMRI at the start of the training program.

The Berns’ lab was the first to conduct fMRI experiments on awake, unrestrained dogs, as part of an ongoing project to understand canine cognition and inter-species communication. In an early experiment, dogs were trained to respond to hand signals. One signal meant the dog would receive a food treat, and another signal meant that the dog would not receive one. The caudate region of the brain, associated with rewards in humans, showed activation when the dogs saw the signal for the treat, but not for the non-treat signal.

The researchers adapted this experiment for the current study — the largest yet involving dogs undergoing fMRI. The dogs were taught hand signals for “treat” and “no treat,” but sometimes the signals were given by the dog’s trainer and other times by a stranger.

The results found that dogs with stronger activity in the caudate in response to the treat signal – regardless of who gave the signal – were slightly more likely to successfully complete the service dog training program. However, if a dog had relatively more activity in the amygdala in response to the treat signal – particularly if the signal was given by a stranger – that increased the likelihood that the dog would fail.

“The ideal service dog is one that is highly motivated, but also doesn’t get excessively excited or nervous,” Berns says. “The two neural regions that we focused on – the caudate and the amygdala – seem to distinguish those two traits. Our findings suggest that we may be able to pick up variations in these internal mental states before they get to the level of overt behaviors.”

Berns hopes that the technology may become more refined and have applications for a broader range of working dogs, such as those used to assist the military and police forces.

How our dogs react to faces (vs other objects)

Dogs have a specialized region in their brains for processing faces, a new study finds. PeerJ is publishing the research, which provides the first evidence for a face-selective region in the temporal cortex of dogs.

“Our findings show that dogs have an innate way to process faces in their brains, a quality that has previously only been well-documented in humans and other primates,” says Gregory Berns, a neuroscientist at Emory University and the senior author of the study. 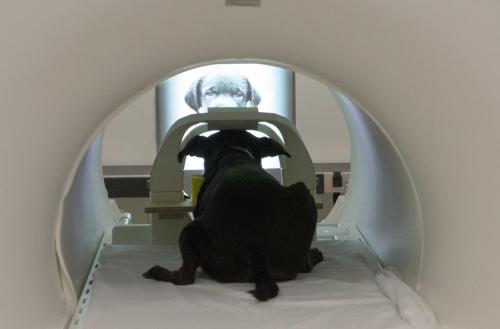 The study involved dogs viewing both static images and video images on a screen while undergoing fMRI. It was a particularly challenging experiment since dogs do not normally interact with two-dimensional images, and they had to undergo training to learn to pay attention to the screen. Photo by Gregory Berns, Emory University

Having neural machinery dedicated to face processing suggests that this ability is hard-wired through cognitive evolution, Berns says, and may help explain dogs’ extreme sensitivity to human social cues.

Berns heads up the Dog Project in Emory’s Department of Psychology, which is researching evolutionary questions surrounding man’s best, and oldest, friend. The project was the first to train dogs to voluntarily enter a functional magnetic resonance imaging (fMRI) scanner and remain motionless during scanning, without restraint or sedation.

For the current study, the researchers focused on how dogs respond to faces versus everyday objects. “Dogs are obviously highly social animals,” Berns says, “so it makes sense that they would respond to faces. We wanted to know whether that response is learned or innate.”

The study involved dogs viewing both static images and video images on a screen while undergoing fMRI. It was a particularly challenging experiment since dogs do not normally interact with two-dimensional images, and they had to undergo training to learn to pay attention to the screen.

A limitation of the study was the small sample size: Only six of the eight dogs enrolled in the study were able to hold a gaze for at least 30 seconds on each of the images to meet the experimental criteria.

The results were clear, however, for the six subjects able to complete the experiment. A region in their temporal lobe responded significantly more to movies of human faces than to movies of everyday objects. This same region responded similarly to still images of human faces and dog faces, yet significantly more to both human and dog faces than to images of everyday objects.

If the dogs’ response to faces was learned – by associating a human face with food, for example – you would expect to see a response in the reward system of their brains, but that was not the case, Berns says.

The researchers have dubbed the canine face-processing region they identified the dog face area, or DFA.

One hypothesis is that distinguishing faces is important for any social creature.

Professor Berns’ group at Emory University is one of the leading research teams in the field of canine cognition.  Previous blog posts about his work include:

Scent of my human

The functional MRI research team led by Gregory Berns have done it again.  In research published in the journal Behavioural Processes, they show that an area of the canine brain associated with reward responds more strongly to the scents of familiar humans than it does to the scents of other humans, or even to those of familiar dogs.

Kady, a lab involved in the study, shown training for the experiment in a mock-up fMRI scanner. Photo by Helen Berns

“In our experiment, the scent donors were not physically present. That means the canine brain responses were being triggered by something distant in space and time. It shows that dogs’ brains have these mental representations of us that persist when we’re not there.”

When humans smell the perfume or cologne of someone they love, they may have an immediate, emotional reaction that’s not necessarily cognitive, Berns notes. “Our experiment may be showing the same process in dogs. But since dogs are so much more olfactory than humans, their responses would likely be even more powerful than the ones we might have.”

The experiment involved 12 dogs of various breeds. The animals had all undergone training to hold perfectly still while undergoing an fMRI scan. As they were being scanned, the subjects were presented with five different scents that had been collected on sterile gauze pads that morning and sealed in Mylar envelopes. The scent samples came from the subject itself, a dog the subject had never met, a dog that lived in the subject’s household, a human the dog had never met, and a human that lived in the subject’s household.

The familiar human scent samples were taken from someone else from the house other than the handlers during the experiment, so that none of the scent donors were physically present.

The dog scents were swabbed from the rear/genital area and the human scents were taken from armpits.

The results showed that all five scents elicited a similar response in parts of the dogs’ brains involved in detecting smells, the olfactory bulb and peduncle. The caudate responses, however, were significantly stronger for the scents of familiar humans, followed by that of familiar dogs.

“The stronger caudate activation suggested that not only did the dogs discriminate the familiar human scent from the others, they had a positive association with it,” Berns says. “While we might expect that dogs should be highly tuned to the smell of other dogs, it seems that the ‘reward response’ is reserved for their humans. Whether this is based on food, play, innate genetic predisposition or something else remains an area for future investigation.”

An interesting twist: The dogs in the experiment that had received training as service/therapy dogs showed greater caudate activation for the scent of a familiar human compared with the other dogs. It is unclear whether this difference was due to genetics or had simply been fostered through the service/therapy training.

“We plan to do further research to determine whether we can use brain-imaging techniques to better identify dogs that are optimal to serve as companion animals for the disabled,” Berns says.

The training of service dogs is time-consuming and expensive, he says, and only about one-third of the animals that begin the process successfully complete it. Meanwhile, the waiting list for service dogs is long, and includes many wounded veterans.

“In addition to serving as companion animals for wounded veterans, dogs play many important roles in military operations,” Berns says. “By understanding how dogs’ brains work, we hope to find better methods to select and train them for these roles.”

Read my other blogs about functional MRI research:

How dogs were trained for functional MRI research

You can also read my other blogs about functional MRI research and dogs: