Doctoral research by Randi I. Krontveit at the Norwegian School of Veterinary Science has revealed that environmental factors play a larger role in the development of hip dysplasia than previously thought.

The critical period is from birth to the age of three months.  Activities such as walking up steps on a daily basis during this critical period increased the risk of developing hip dyplasia.

The study group consisted of 500 dogs in four breeds:  the Labrador Retriever, the Newfoundland, the Leonberger and the Irish Wolfhound. 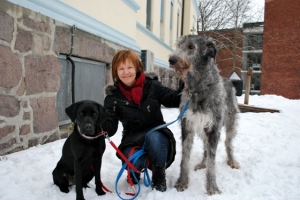 Randi I. Krontveit with two of her study subjects. Photo courtesy of the Norwegian School of Veterinary Medicine

Environmental factors were assessed by questionnaires filled out by breeders and owners alongside examinations by veterinarians.  Dogs were followed for a period of ten years, making the findings of the study particularly robust.

Puppies born in the spring or summer and at breeders’ who lived on a farm or small holding had a lower risk of developing hip dysplasia.  After about eight weeks, the puppies began to live with their new owners. The opportunity to exercise daily in parks up until the age of three months reduced the risk of hip dysplasia.

Overall, it would appear that daily exercise out in gently undulating terrain up until the age of three months has a positive impact when it comes to preventing the disease.

For more information about this research, you can email Dr Krontveit via this page at the Norwegian School of Veterinary Medicine.

Today I massaged a Leonberger, who unfortunately has had to have cruciate ligament surgeries in both legs over the years and as a consequence she is starting to have lots of aches and pains.  What a beauty!  She was the epitome of the ‘Gentle Giant’ and, despite her size, amongst the easier dogs I have handled in my dog massage career.

I’ve done some research on the breed and so I thought I’d share it with you.  Leonbergers originated in Germany in the town of Leonberg.  The mayor there wanted a dog that resembled the lion image of the town’s crest.  The breed is a combination of Newfoundland, Saint Bernard, and Pyrenean Mountain Dog. 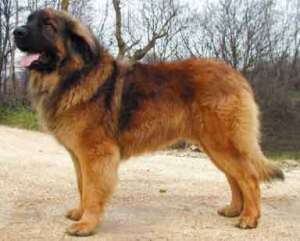 If you are interested in owning one of these giant dogs,  I recommend that you do your own research on the breed and then contact your local breed club for information on breeders and upcoming litters.

In New Zealand, we have approximately 300 Leonbergers in the country.  The Leonberger Club New Zealand has an excellent and easy to navigate website.