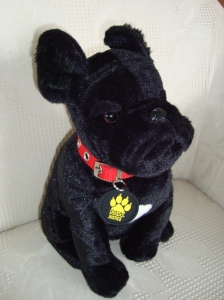 he’s the official mascot of Paw Justice, the animal welfare organisation in New Zealand.  Louis is a real French Bulldog who won the Paw Justice calendar competition for 2012.

For only $39.00 (plus postage), you can adopt your very own Louis.  Simply order from the Paw Justice website.

When you buy Louis, $5 is donated to help the work of Paw Justice, which is fighting animal abuse in New Zealand through education and advocacy.

Yale University in New Haven, Connecticut is reportedly the first university in the United States to adopt a mascot, dating back to the 1890’s when a student from England started the tradition. 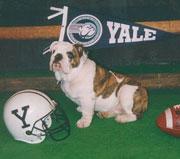 The official bulldog is named ‘Handsome Dan’ and the university’s current Handsome Dan is Number 17!  (You can read about all of the Handsome Dans on this website.)

Handsome Dan will appear at games of the university’s football team – you guessed it – The Bulldogs.

Cole Porter (class of 1913) wrote the Bulldog Song, which is the Yale fight song.  It’s played by the band whenever a touchdown is scored.  The song goes like this:

When the sons of Eli
Break through the line
That is the sign we hail
Bulldog!  Bulldog!
Bow, wow, wow
Eli Yale!

Official merchandise of the Yale athletics teams is known as Bulldog Blue.

And like most university mascots, the image of Handsome Dan is replicated throughout merchandise, events and student life on the Yale campus.

Many institutes of higher learning have adopted a dog as their official mascot.  In this, what I hope will be my first profile of such dogs, I’d like to introduce you to the Northeastern University Husky.

In a prominent foyer of the main campus, a bronze sculpture of the Husky has been on display for decades in homage of the dog’s role as the official mascot.

It’s a common meeting place for students and faculty, particularly as the foyer provides a haven from what can be rainy or snowy weather in Boston. 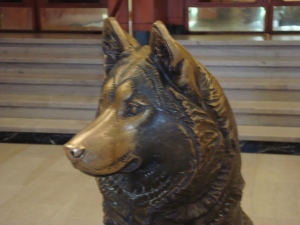 The statue’s muzzle has been worn smooth from the amount of petting it has had over the years.

In addition, the sports teams of Northeastern are referred to as the Huskies, the newsletter of the university is The Husky Nation, and the on-campus card for purchasing is The Husky Card.

Visit the official university bookstore and you can buy t-shirts, sweatshirts and other items bearing the Husky image.  If you are lucky, a real Husky will attend a special sport or other event being held at the University!