A close up look at how our dogs drink…

The drinking mechanism of a dog is videotaped from three different angles (A, B, and C). The curved tongue is rapidly withdrawn and a water column is formed underneath. A physical experiment is designed to understand and characterize the underlying fluid mechanics. Photo by: Sean Gart and Sunghwan (Sunny) Jung/Virginia Tech

By studying the drinking habits of various dog breeds and sizes, a group of researchers at Virginia Tech and Purdue University has recently identified and modeled the fluid dynamics at play when dogs drink water.

“Three years ago, we studied how cats drink,” said Sunny Jung, an assistant professor at Virginia Tech. Jung’s research focuses include biofluid mechanics and the nonlinear interactions between soft bodies and surrounding fluids. His current project is sponsored by the National Science Foundation’s Physics of Living Systems program. “I was curious about how dogs drink, because cats and dogs are everywhere.”

As members of the order Carnivora, cats and dogs have incomplete cheeks, which allow them to open their mouths wide to deliver killing blows. But what makes pack hunting possible also makes suction drinking impossible. Unable to seal their cheeks completely, there is no way for a dog to suck up water. Conversely, humans have “complete” cheeks, and we drink by creating negative pressure, allowing us to suck water into our mouths and down our throats.

Cats, too, lack suction, and they compensate by drinking via a two-part “water entry-and-exit” process. This consists of a plunging and a pulling phase, in which a cat gently places its tongue on the water’s surface and then rapidly withdraws it, creating a column of water underneath the cat’s retracting tongue.

“When we started this project, we thought that dogs drink similarly to cats,” Jung said. “But it turns out that it’s different, because dogs smash their tongues on the water surface — they make lots of splashing — but a cat never does that.”

When dogs withdraw their tongue from water, they create a significant amount of acceleration — roughly five times that of gravity — that creates the water columns, which feed up into their mouths. To model this, Jung placed cameras under the surface of a water trough to map the total surface area of the dogs’ tongues that splashed down when drinking.

The researchers found that heavier dogs drink water with the larger wetted area of the tongue. This indicates that an allometric relationship exists between water contact area of the dog’s tongue and body weight – thus the volume of water a dog’s tongue can move increases exponentially relative to their body size.

In order to better understand how the physiology works, Jung and his colleagues could only go so far by watching dogs drink. They had to have the ability to alter the parameters and see how they affected this ability, and since they could not actually alter a dog in any way, they turned to models of the dog’s tongue and mouth. “We needed to make some kind of physical system,” Jung said.

For their model, Jung and his colleagues used glass tubes to simulate a dog’s tongue. This allowed them to mimic the acceleration and column formation during the exit process. They then measured the volume of water withdrawn. They found that the column of water pinches off and detaches from the water bath primarily due to gravity. Dogs are smart enough to close their mouth just before the water column collapses back to the bath. 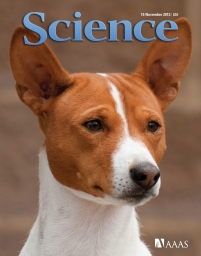 Wolves likely were domesticated by European hunter–gatherers more than 18,000 years ago and gradually evolved into dogs that became household pets, say a research team based at the University of California Los Angeles.

“We found that instead of recent wolves being closest to domestic dogs, ancient European wolves were directly related to them,” said Robert Wayne, a professor of ecology and evolutionary biology in UCLA’s College of Letters and Science and senior author of the research. “Europe is where the oldest dogs are found.”

The team’s genetic analysis is published 15 November issue of the journal Science.

The biologists studied the mitochondrial DNA of the animals, which is abundant in ancient remains. By comparing this ancient mitochondrial DNA with the modern mitochondrial genomes of 77 domestic dogs, 49 wolves and four coyotes, the researchers determined that the domestic dogs were genetically grouped with ancient wolves or dogs from Europe — not with wolves found anywhere else in the world or even with modern European wolves. Dogs, they concluded, derived from ancient wolves that inhabited Europe and are now extinct.

Wayne said that that the domestication of predatory wolves likely occurred among ancient hunter–gatherer groups rather than as part of humans’ development of sedentary, agricultural-based communities.

“The wolf is the first domesticated species and the only large carnivore humans ever domesticated,” Wayne said. “This always seemed odd to me. Other wild species were domesticated in association with the development of agriculture and then needed to exist in close proximity to humans. This would be a difficult position for a large, aggressive predator. But if domestication occurred in association with hunter–gatherers, one can imagine wolves first taking advantage of the carcasses that humans left behind — a natural role for any large carnivore — and then over time moving more closely into the human niche through a co-evolutionary process.”
There is a scientific debate over when dogs were domesticated and whether it was linked with the development of agriculture fewer than 10,000 years ago, or whether it occurred much earlier. In the new Science research, Wayne and his colleagues estimate that dogs were domesticated between 18,000 and 32,000 years ago.

The research was federally funded by the National Science Foundation.

You can read more about the team’s research in this UCLA media release.