Moxie was a 3-year old urban search and rescue dog when she and her handler were called to the World Trade Center in September 2001.  Now, she’s a a retired senior dog who is still playing at the park. 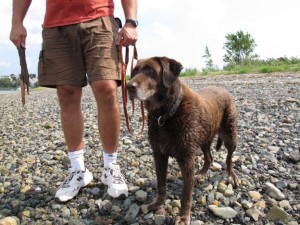 Her handler, Mark Aliberti, recalls their experience at the World Trade Center site in this WBUR radio news story:

This year marks the 10th anniversary of the September 11, 2001 terrorist attacks.   The date of 9/11 is one that most of us will remember, recalling exactly where we were and what we were doing when the news of the attacks came through.

In my case, it was first thing in the morning New Zealand time and I had turned on the radio for news (something I do every morning) – as it was September 12th in New Zealand.  It was also the morning to get dressed up, as I was being sworn in as a New Zealand citizen.  The ceremony was very memorable, with the Mayor of Christchurch making special reference to the day’s events and what the US citizens in the room must be feeling.

I hope you are as moved by this video as much as I am.  It is about the 300 urban search and rescue dogs who worked at the World Trade Center site.  And it also tells you about Sirius, the bomb detection dog who died in the collapse.