You’ve probably heard about Short Man Syndrome.  (In fact, many of us (including me) have experienced it firsthand!)

Did you know that there is growing evidence of Short Dog Syndrome?

Researchers at the University of Sydney have published their research into this topic in the online journal PLoS One.  Professor Paul McGreevy is the lead author of the study and says, “the shorter the dogs the less controllable their behaviour is for their owners.” 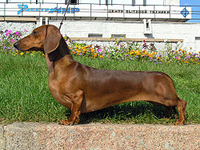 The study used owners’ reports on the behaviour of over 8,000 dogs from across 80 breeds and related them to the shape of 960 dogs of those breeds, revealing strong relationships between height, bodyweight, skull proportions (relative width and length) and behaviour.

33 out of 36 undesirable behaviours were associated with height, bodyweight and skull shape

As a breed’s average height decreased, the likelihood of behaviors such as mounting humans or objects (humping), owner-directed aggression, begging for food and attention-seeking increased.

The researchers admit that there is an aspect here of nature vs nurture.  If aggressive and ‘bad’ behaviours were present in larger dogs, the results could be more dangerous.  Poor behaviour in small dogs is likely to be tolerated more.  Over time, breeding has resulted in the patterns observed by the research team.