Marilyn Monroe and her dogs

Over the course of her life, Marilyn Monroe owned a number of dogs.

A black and white mixed breed by the name of Tippy was given to then Normal Jean by her foster father.

A spaniel named Ruffles was an early companion around 1940-1942.

Her husband Jim Dougherty bought her a collie named Muggsie.

Around about the time that she was signed by Columbia Pictures in 1948, Marilyn reportedly owned a chihuahua but I can’t find a record of the name.

During her marriage to Arthur Miller, a basset hound named Hugo was their companion.  Miller retained ownership of Hugo when the couple divorced. 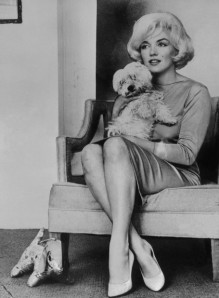 Maf was a maltese given to Marilyn by Frank Sinatra.  The dog’s full name was Mafia Honey in honour of Sinatra’s alleged mafia connections.  When Marilyn died, the dog was given to Sinatra’s secretary.

In 2010, author Andrew O’Hagan documented Maf’s story in a book The Life and Opinions of Maf the Dog, and of His Friend Marilyn Monroe.  Written from Maf’s point of view, we read about Marilyn’s last two years  (she took the dog to Hollywood, New York and to Mexico).

A lot has been written about Marilyn and her all-too-short life.  What a nicer way to picture the actress than through her dog?  (Dogs don’t lie and they don’t tell tails – oops I mean tales)