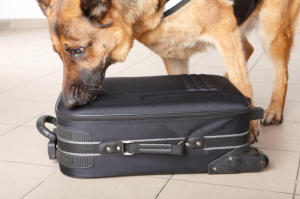 A study  funded with a $1 million grant from the U.S. Department of Justice, has found that detection dogs are more reliable detectors than previously thought.  The study has been conducted by Cornell’s College of Veterinary Medicine.

The study is the first to be conducted in the world’s only detection dog research facility designed in conjunction with a military dog trainer. The Alabama facility, which provides expert detection dogs to police and military forces, flushes out fumes between tests, ensuring a fresh field each time.

Researchers have found that the key to improving a dogs’ smelling skills through diet is achieved by limiting proteins and increasing fats.  Such a diet, the research team says, appears to help dogs return to lower body temperatures after exercise, which reduces panting and, thereby, improves sniffing.

‘Dogs tested in the new facility signaled with 90 percent and above accuracy. We also found we can push detection performance even further with the right kind of food.’ said Joseph Wakshlag, associate professor of clinical studies and chief of nutrition at Cornell’s College of Veterinary Medicine.

‘Corn oil has lots of polyunsaturated fats, similar to what you’d find in a lot of nuts and common grocery store seed oils,’ said Wakshlag. ‘Past data from elsewhere suggest that these polyunsaturated fats might enhance the sense of smell, and it looks like that may be true for detection dogs. It could be that fat somehow improves nose-signaling structures or reduces body temperature or both. But lowering protein also played a part in improving olfaction.’

One response to “More fat and less protein for sniffing dogs”