What are you looking at? (Dogs follow the human gaze)

Dogs are known to be excellent readers of human body language in multiple situations. Surprisingly, however, scientists have so far found that dogs do not follow human gaze into distant space. Scientists at the Messerli Research Institute at the Vetmeduni Vienna investigated how this skill of dogs is influenced by aging, habituation and formal training. The outcome: Gaze following to human gaze cues did not differ over the dogs’ lifespan, however, formal training was found to directly influence gaze following in dogs.

Gaze following to distant space has been documented in many species and is considered a basic response found in many taxa. Dogs may present a special case as the researchers found evidence that they are able to follow human gaze to objects such as food or toys, but not for the comparatively simpler task of following gaze into distant space.

Two possible reasons were offered to explain this phenomenon: One reason could be habituation. Dogs lose their innate gaze following response as they age, as they are frequently exposed to human gaze cues over their lifespan and slowly stop responding to them. Another reason could be formal training such as obedience, agility, and trick training may interfere with the dogs’ response to gaze cues, since dogs are usually trained to look at the owner, to wait for commands and ignore distractions.

Lead author Lisa Wallis and her colleagues at the Vetmeduni Vienna investigated 145 Border Collies aged 6 months to 14 years in the Clever Dog Lab in order to address the question of whether habituation, and/or training influences dogs’ gaze following response, and to determine, for the first time, how this ability changes over the course of a dog’s life by comparing groups of dogs of different ages.

Dogs of all ages are able to follow human gaze

The scientists tested two groups of dogs with differing amounts of formal training over their lifespan. Both groups participated firstly in a test and control condition, where their initial gaze following performance was measured. The experimenter obtained the dogs’ attention using its name and the command “watch” after which the experimenter turned her head swiftly to look at the door of the testing room in the test condition, or looked down to the floor next to her feet in the control condition. If the dogs responded by looking at the door within two seconds in the test condition but did not look at the door in the control condition, a gaze following response was recorded. 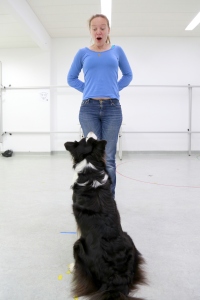 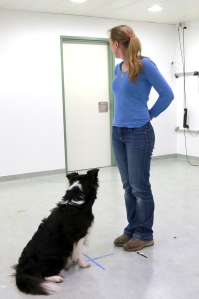 The authors conclude that formal training had a stronger influence than aging or habituation on dogs’ gaze following response. This may explain why previous studies have failed to find a gaze following response when cues to distant space are used, and why in comparison to other species dogs perform relatively poorly in this task. The fact that the experimenter used strong attention-getting cues and provided contextual relevance by looking at a door may have also contributed to the positive results found in this study.

“From a very young age dogs have experience with doors when they live in human homes. The dogs develop an understanding that at any time an individual may enter the room, and therefore doors hold special social relevance to dogs”. – says Lisa Wallis.

In her current project, together with her colleague Durga Chapagain, Wallis is investigating the effects of diet on cognitive aging in older dogs. The scientists are still looking for dog owners who would like to participate in that long-term study (food is provided for free).

This research has been published in the journal Animal Behaviour.