Posted on October 23, 2018 | Leave a comment
New research led by the University of Sydney has revealed the life expectancy of chocolate Labradors is significantly lower than their black and yellow counterparts. 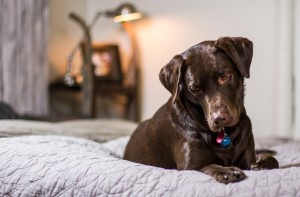 The study of more than 33,000 United Kingdom-based Labrador retrievers of all colours shows chocolate Labradors also have a higher incidence of ear infections and skin disease. Its findings were published in the open access journal Canine Genetics and Epidemiology.

Part of the University’s VetCompass™ Programme, which collects and analyses electronic patient data on dogs, the research is being replicated in Australia, where Labradors are the most popular breed of dog.

In the UK, the median longevity of non-chocolate Labradors is 12.1 years, more than 10 percent longer than those with chocolate coats. The prevalence of ear inflammation (otitis externa) was twice as high in chocolate Labradors, who were four times more likely to have suffered from pyo-traumatic dermatitis (also known as hot-spot).

Lead author Professor Paul McGreevy, from the University’s Faculty of Science, said the relationship between coat colour and disease came as a surprise to researchers. The UK findings may not hold in Australian Labradors, he said, but warrant investigation.

“The relationships between coat colour and disease may reflect an inadvertent consequence of breeding certain pigmentations,” he said. “Because chocolate colour is recessive in dogs, the gene for this colour must be present in both parents for their puppies to be chocolate. Breeders targeting this colour may therefore be more likely to breed only Labradors carrying the chocolate coat gene. It may be that the resulting reduced gene pool includes a higher proportion of genes conducive to ear and skin conditions.”

Across the entire Labrador population, the most common health conditions found were obesity, ear infections and joint conditions.

“We found that 8.8 percent of UK Labradors are overweight or obese, one of the highest percentages among dog breeds in the VetCompass™ database,” Professor McGreevy said.

The prevalence was higher among male dogs who had been neutered.