New research finds Australian labradoodles are more poodle than lab. Here’s what that tells us about breeds

It all started in the late 1980s. Wally Conron, a breeding manager for Guide Dogs Victoria, noticed that some people needing a guide dog appeared to be allergic to the shedding hairs of Labrador retrievers.

Aware of the perception that poodles shed little hair and so shouldn’t create such a reaction, Wally crossed a Labrador retriever with a standard poodle. The result proved to be successful, and breeding “labradoodles” took off around the world, with Wally left standing on the sidelines.

These results aren’t surprising to animal geneticists. They provide scientific evidence for the common understanding of how breeders choose dogs to mate for their desirable traits, such as a poodle-like coat. And over generations, this preference leads to a strong genetic predominance in the new breed.

What the research found

The researchers from U.S., Pakistan and South Korea analyzed genetic data from individual Australian labradoodle dogs and a variety of other breeds, including Labrador retrievers and poodles of different varieties. They included dogs from the two distinct types of labradoodles:

Labradoodles: the offspring of a Labrador and a poodle

Australian labradoodles: dogs resulting from generations of breeding and selection among the descendants of early crosses between Labrador retrievers and standard poodles and (as it turns out) the occasional other breed.

So what did the researchers discover? Not surprisingly, the actual offspring of a cross between a Labrador and a poodle have an equal share of genetic material from each breed. We expect this because each pup will have one Labrador chromosome and one poodle chromosome for each chromosome pair.

Also not surprisingly, individual dogs of the Australian labradoodle breed have a range of proportions of Labrador and poodle ancestry, strongly tending towards the poodle.

When first generation labradoodles are bred together, their resulting descendants have a range of genetic contributions from the Labrador or poodle grandparents.

Given the main initial aim of creating labradoodles was to make use of the perceived low-allergenic properties of poodles, the higher proportion of poodle ancestry in Australian labradoodles is expected after generations of selection for a poodle-like coat. This is the main conclusion of the paper just published.

Interestingly, the researchers make the important point that even though a poodle-like coat is widely regarded as being lowly allergenic, there seems to have been no research study that has investigated this. This is an important knowledge-gap that needs to be filled.

The study also found other breeds have made small contributions to Australian labradoodles, including poodles of different size varieties. There’s even a touch of spaniel.

This is a common occurrence. As soon as breeders decide to mix two breeds in the hope of combining some desirable traits, it makes sense to introduce other breeds if it’s thought they could make a useful contribution. For example, a cockerpoo (cocker spaniel crossed with a poodle) might have been mixed in to make the breed smaller.

What does this tell us about the concept of dog breeds?

This study reinforces the common understanding that, from a biological point of view, a breed is an amalgam of genetic variation derived from various sources. It shows Australian labradoodles have considerable genetic diversity, most of it derived from poodles.

As a breed becomes more recognized and more formalized, the only animals that can be registered as members of that breed are the offspring of other registered members. At present, Australian labradoodles are commonly regarded as a breed but are not, so far as we can determine, officially recognized as such by relevant national authorities.

Importantly, there are no scientific criteria for when a breed should become closed and when it should be formally recognized: these are decisions that are made solely by interested breeders and the registering authorities.

What this means for breeders

The Australian Labradoodle Association lists 32 accredited breeders which suggests the breed is a moderately-sized population in Australia. It likely produces 150 to 300 pups per year. This is a population size comparable with many other registered dog breeds in Australia.

As in any population of most animal species, problems can arise in any breed from the mating of close relatives. The more closely related the parents, the greater is the chance valuable genetic variation will be lost from a breed, and the greater the chance of offspring having inherited diseases.

Fortunately, pedigree tools are available to enable breeders to consider a wide range of possible matings. DNA tests, which are becoming increasingly available for inherited diseases, can also be very helpful.

In any case, the new research results have provided an important, solid scientific underpinning of the common understanding of how breeds are formed. By combining the desirable aspects of both Labradors and poodles in one breed, the Australian labradoodle is a welcome addition to the dog-breed pantheon.

It is to be hoped breeders of Australian labradoodles, indeed breeders of all breeds, use the available powerful scientific tools to maintain genetic variation within their breed and reduce substantially the chance of inherited diseases.

The United States Postal Service has announced a new release of stamps for 2019 dedicated to military dogs.

The release date for the stamps isn’t known yet; but they are going to be hot property for dogs lovers and stamp collectors alike! 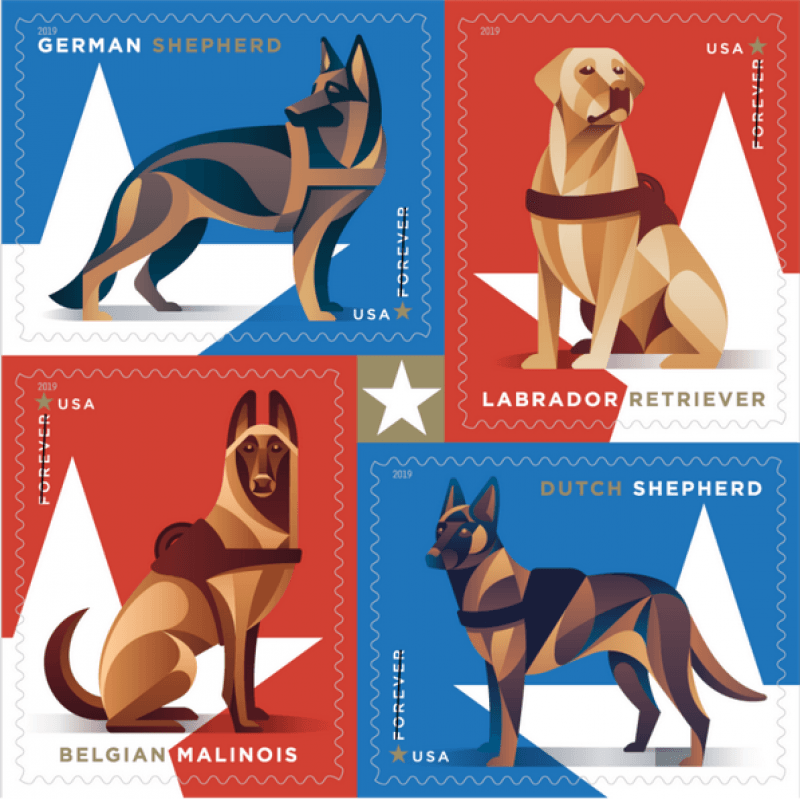 Posted on October 23, 2018 | Leave a comment
New research led by the University of Sydney has revealed the life expectancy of chocolate Labradors is significantly lower than their black and yellow counterparts.

The study of more than 33,000 United Kingdom-based Labrador retrievers of all colours shows chocolate Labradors also have a higher incidence of ear infections and skin disease. Its findings were published in the open access journal Canine Genetics and Epidemiology.

Part of the University’s VetCompass™ Programme, which collects and analyses electronic patient data on dogs, the research is being replicated in Australia, where Labradors are the most popular breed of dog.

In the UK, the median longevity of non-chocolate Labradors is 12.1 years, more than 10 percent longer than those with chocolate coats. The prevalence of ear inflammation (otitis externa) was twice as high in chocolate Labradors, who were four times more likely to have suffered from pyo-traumatic dermatitis (also known as hot-spot).

Lead author Professor Paul McGreevy, from the University’s Faculty of Science, said the relationship between coat colour and disease came as a surprise to researchers. The UK findings may not hold in Australian Labradors, he said, but warrant investigation.

“The relationships between coat colour and disease may reflect an inadvertent consequence of breeding certain pigmentations,” he said. “Because chocolate colour is recessive in dogs, the gene for this colour must be present in both parents for their puppies to be chocolate. Breeders targeting this colour may therefore be more likely to breed only Labradors carrying the chocolate coat gene. It may be that the resulting reduced gene pool includes a higher proportion of genes conducive to ear and skin conditions.”

Across the entire Labrador population, the most common health conditions found were obesity, ear infections and joint conditions.

“We found that 8.8 percent of UK Labradors are overweight or obese, one of the highest percentages among dog breeds in the VetCompass™ database,” Professor McGreevy said.

The prevalence was higher among male dogs who had been neutered. 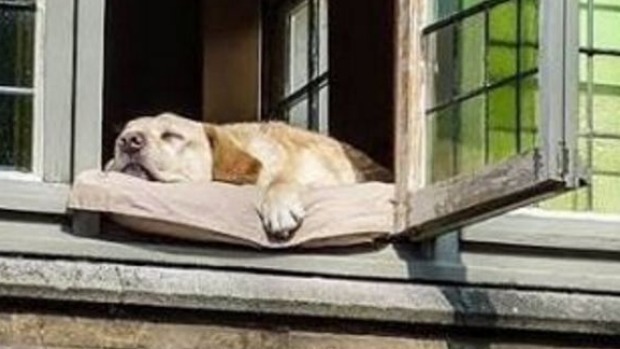 Fidele, the Golden Labrador who lived at the Bed and Breakfast Coté Canal and made a small appearance in the film In Bruges, passed away in early February at the age of 12.

His owner, Caroline Van Langeraert, has said that Fidele became an icon, with tourist boats along the canals stopping so tourists could take photos of him in his regular resting space at the window of the bed and breakfast.  He is irreplaceable.

Many tourists will have photos and videos of Fidele in his spot at the window, as seen here in YouTube.

It is always sad to see our dog friends leave; particularly so when they share our businesses and our customers know them well.  (Apparently, one US tourist asked to book into the bed and breakfast specifically because she had heard about Fidele.)

Chester, a nine-year old black Labrador, made a name for himself earlier this year in Colorado.  Over the course of a 16-week trial, he comforted the victims, witnesses and first responders who were giving testimony in the trial of James Holmes.

Holmes was charged with the killing of 12 people and the wounding of 70 others when he opened fire at an Aurora, Colorado movie theater.  He was found guilty and sentenced to life in prison.

This video shows the value of Chester in his role as a comfort dog.

However, Chester’s story doesn’t stop there.  Last month, he ended up as a patient at Colorado State University.  He was having severe neck pain and was diagnosed with discospondylitis, an infection of the bone in the vertebrae of the lower cervical spine.

Chester has made a successful recovery.  This special dog got the care he needed when his condition was urgent.

Special care for a special dog (but all dogs are special, aren’t they…)

A day in the life of a therapy dog

I love it when we hear about dogs who are able to use their instincts, talents and charm for good.  There is a growing body of knowledge about how the company of dogs can assist with human therapies.

In this video, the pet therapy program at HCA Virginia’s Chippenham and Johnston-Willis hospitals is featured.  Meet Fraser, a Black Labrador/Golden Retriever mix.  Fraser’s canine colleague, Schaffer, doesn’t feature in this video.  But, as full-time employees of HCA Virginia, the dogs receive benefits which include supplies and paid veterinary care.

Helping each other – a Valentine’s lesson

On this Valentine’s Day, I hope you will consider your dog your furry Valentine.  Make time for each dog in your life.

And as a little Valentine’s Day lesson, here’s a video of a Labrador helping out his brother so they can get to the dog park:

Going to the dog park via public transport

Eclipse, a Black Labrador living in Seattle, has made the local news…  She’s so enthusiastic about going to the dog park, she often takes herself there – on the bus!

Enjoy this story about a special black Lab! 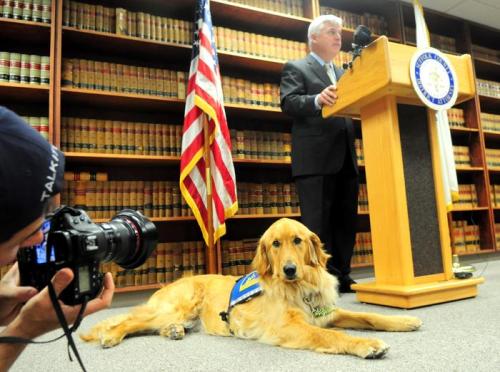 Indy at her press conference (photo courtesy of Boston.com)