The Ark at JFK

The facility, which will measure 178,000 square feet and cost $48 million, will be called The Ark at JFK.  Its developer, ARK Development, says the facility “has been conceived as the world’s only privately owned animal terminal and USDA-approved, full-service, 24-hour,  airport quarantine facility for import and export of horses, pets, birds and livestock.”

The terminal will be home to a 24-hour Paradise 4 Paws pet resort featuring a bone-shaped dog pool, pet suites with a flat-screen TV option, massage therapy and a jungle gym for cats. 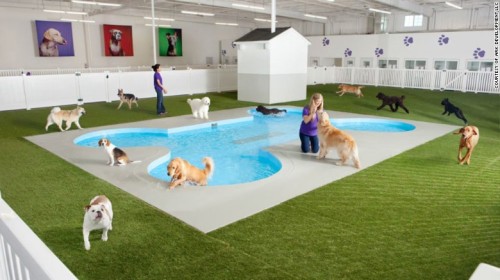 For dogs and other pets on long-haul journeys, this facility promises to offer the highest standard in care.  Can’t wait to see it – it should be open in 2016.

In today’s Christchurch Press, comes news that Christchurch Airport has employed its first Border Collie, Jet, to scare away geese and other birds from the runway areas.

14-week old Jet, Christchurch Airport’s newest employee, will undergo training to get her used to the noisy runways at the airport (Photo by The Press)

Bird strike is a major hazard for modern aviation.  Bird strike was the cause of the engine failure on US Airways Flight 1549 in 2009, for example.  That plane landed safely in New York’s Hudson River in what was called the “Miracle on the Hudson.”  Bird strike can also cause damage to aircraft windscreens and fuselages, not just engines.

Jet’s arrival in Christchurch is a first for New Zealand but Border Collies have been patrolling airports in other countries for many years.

Birds view the dogs as natural predators and so, where they may become accustomed to other scare tactics like sirens, the birds will always be wary of being chased by a dog. 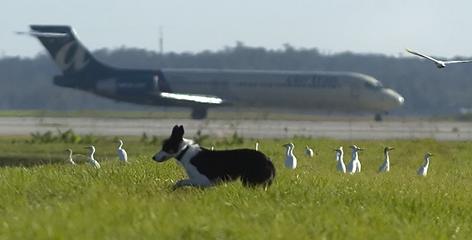 A Border Collie at the Southwest International Airport in Fort Myers, Fla.
By Marc Beaudin, The (Ft. Myers, Fla.) News-Press

The Detroit Metropolitan Airport has just invested $75,000 for a dog loo primarily to support service dogs traveling with their owners. 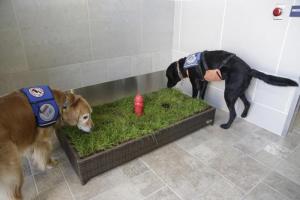 Most dogs in airports are certified service dogs but this facility will also help passengers who are flying with their dogs on holiday or to events like dog shows.  Small dogs can fly in the cabin of most US airlines providing they meet size restrictions.

For other blogs about dogs, relief areas and airports read these postings: 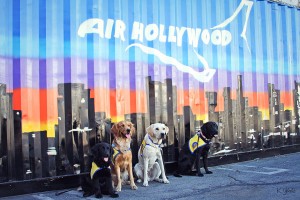 Assistance dogs and small dogs that are allowed to fly in aircraft cabins are now supported with a training program specifically for them!

The training is provided by Air Hollywood, a studio where the television show Lost was filmed.  The K9 Flight School prepares people and pets to travel confidently by simulating a real aviation environment.  During the training, dogs are exposed to:

The one-day course costs $349.   Will your dog become a frequent flyer?

Travelling through LAX? Meet the PUPS!

Los Angeles International Airport (LAX) is known for its frantic pace and passenger volumes.  While it can be an exciting place, it can also be stressful.

Dogs are about to make this airport a whole lot better!

PUPS, Pups Unstressing Passengers, was launched last week.  This new programme involves trained dogs and their volunteer handlers who will wander throughout the gate and departure areas to visit with passengers.  They’ll provide comfort as well as be knowledgeable about the airport.

Each volunteer had a 4-hour classroom session to enable them to be familiar with the airport, the layout of airlines, and operational procedures.

This YouTube video provides an overview of the programme, including the collectible trading cards that will be available portraying each dog’s photo!

Can’t wait to travel through LAX on my next trip!  (And maybe, for those of us traveling from New Zealand, San Francisco’s airport will start a similar initiative.)

In May, I featured an item about the pet relief area at the Maui airport.

Did you know that in 2008, the US Department of Transportation passed a law called the Air Carrier Accessibility Act?  This Act requires airports to have relief facilities available to service dogs.

Many airports have since realised the value of catering to their customers who are traveling with their dogs and opened up these facilities not only to service dogs but all dogs.  One airport that is leading the way is the Phoenix Sky Harbor International Airport.  This airport has pet parks at all three of its passenger terminals.  They are:

If you are traveling through Phoenix, remember that the Airport offers these facilities and, if you’re not, here’s a great video of the Airport’s pet parks for you to enjoy: