With a sense of smell much greater than humans, dogs are considered the gold standard for explosive detection in many situations. But that doesn’t mean there isn’t room for improvement.

In a study appearing in the journal Analytical Chemistry, scientists report on a new, more rigorous approach to training dogs and their handlers based on real-time analysis of what canines actually smell when they are exposed to explosive materials. 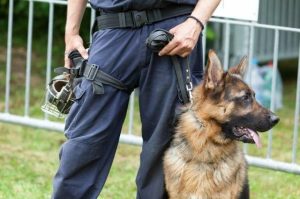 New training techniques based on real-time analysis of what a dog smells could improve explosives detection. Credit: wellphoto/Shutterstock.com

Explosives are often used in terrorist attacks. Dogs trained to detect odors emanating from TNT, nitroglycerin and other explosives are a crucial part of the first-line defense against these incidents. But delivering low-concentration vapor during training sessions is a challenging task. Cross-contamination of training materials with samples from different explosives can skew results and confuse both dogs and handlers. To address these concerns, Ta-Hsuan Ong and colleagues sought to better understand the components within explosive odors that cue a dog’s reaction.

The researchers developed a real-time vapor analysis mass spectrometer to more accurately measure the vapor plumes from explosives that trigger a canine response.

In field trials, they used the device and found that some mistakes the dogs made were indeed correct identifications. For example, some “blanks” were used that were ostensibly prepared without explosive material, but the dogs indicated an explosive was present. When the researchers used the mass spectrometer on such blanks, they found evidence of explosive vapors, indicating cross contamination occurred or other interferents were present.

Based on these findings, the researchers suggest that use of real-time vapor analysis could help differentiate canine mistakes from cross contamination and other issues during training.

Unfortunately, we live in a world where people still build bombs to kill and maim.  Dogs have traditionally been trained to detect explosive devices by learning to detect specific odours and then to signal their handler. 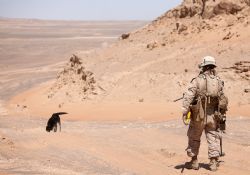 A detection dog in action

The process of training a bomb detection dog is slow because the dog is trained to identify each scent individually.  In countries like Afghanistan and Iraq, homemade devices are made using mixtures of explosives.

With a grant from the Office of Naval Research, researchers at the University of Lincoln (UK) will investigate whether explosive detection dogs are capable of learning by categorisation, a cognitive process that is thought to play a major role in the way humans and animals naturally process new information.

The study will explore whether dogs can be trained to recognise the significance of a group of odours, rather than having to learn each scent individually.

Researcher Helen Zulch says, “In this study we will be testing whether a dog can be taught a general rule for a group of odours and then apply that knowledge to a new situation, involving scents it has never encountered. We know dogs can categorise visual stimuli, so the aim of this study is to find out whether dogs are able to categorise odours in a similar manner.”

If successful, the research will underpin new training approaches that will accelerate the process of training detector dogs.