Leighton Buzzard is a village in Bedfordshire (UK).  It’s home to Callie, a Chocolate Labrador with flying credentials.

As an official member of air crew, Callie’s identification card helps her to clear airport security. The card was issued by the Aircraft Owners and Pilots Association (AOPA)

At the age of 3 months, her owner Graham Mountford  first took Callie in the his Cessna.  He said, “We first tried her in the plane when she was a few months old, just taxiing around the airfield, and she seemed to love it.”

Callie is now over 3 years old and has more than 250 hours of flying experience.  Her favorite trips are to beaches where she can run and play. 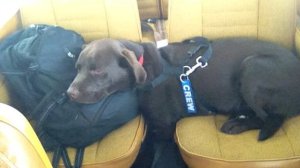 Callie tends to sleep on the plane, but apparently gets excited during take offs and landings

An AOPA spokeswoman said “She is the only dog we’ve issued with a card, and it’s going to be renewed.”