Research led by investigators in veterinary and human medicine has identified genetic pathways that exacerbate severity of canine compulsive disorder in Doberman Pinschers, a discovery that could lead to better therapies for obsessive compulsive disorder (OCD) in people.  The discovery appears in the International Journal of Applied Research in Veterinary Medicine. 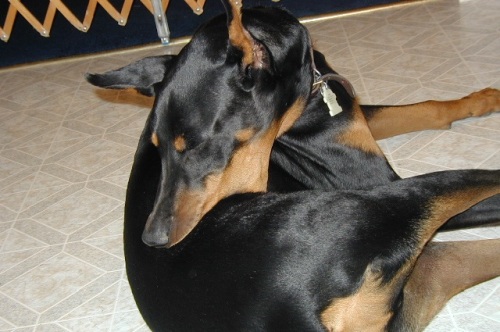 “Dogs naturally suffer complex diseases, including mental disorders that are similar to those in humans. Among those is canine compulsive disorder (CCD), the counterpart to human obsessive compulsive disorder (OCD),” says the study’s first and corresponding author Nicholas Dodman, BVMS, DACVA, DACVB, professor in clinical sciences and section head and program director of animal behavior at Cummings School of Veterinary Medicine at Tufts University.

OCD is one of the world’s most common neuropsychiatric disorders, affecting an estimated 1 to 3 percent of people and listed by the World Health Organization as among the 20 most disabling diseases. OCD is often characterized by distressing thoughts and time-consuming, repetitive behaviors, while canine compulsions may include repetitive tail chasing, excessive grooming and flank and blanket sucking. Current OCD therapies are not as effective as they could be; medicinal treatment benefits only about half of all human patients.

No previously recorded study in humans or dogs has addressed the factors that drive severity in OCD and CCD.

“Genomic research on human neuropsychiatric disorders can be challenging due to the genetic heterogeneity of disease in humans,” says neurologist Edward Ginns, MD, PhD, professor of psychiatry, neurology, pediatrics and clinical pathology, and director, program in medical genetics at the University of Massachusetts Medical School and a co-author on the new study. “Canine compulsive disorder shares behavioral hallmarks, pharmacological responsiveness, and brain structural homology with human OCD, and thus is expected to be an important animal model.”

The research team compared whole genome sequencing of 70 Doberman pinschers to search for inherited factors that exacerbate CCD. Researchers identified two loci on chromosomes that were strongly correlated with severe CCD, as well as a third locus that showed evidence of association.

The locus most strongly associated with severe CCD was found on chromosome 34 – a region containing three serotonin receptor genes.

“This is particularly significant because drugs that work on the serotonin system are the mainstay treatment for OCD in humans, which demonstrates further correlation between the human and animal models,” says Dodman.

The second locus significantly correlated with severe CCD was on chromosome 11, the same chromosome that contains a gene thought to increase the risk of schizophrenia in humans. This discovery, along with suggestive evidence found on chromosome 16 linking CCD to stress tolerance, may also be relevant to the pathophysiology of OCD, according to the study authors. “Comparative genomics is a particularly attractive approach to reveal the molecular underpinnings of disease in inbred animals with the hope of gaining new insights into these diseases in dogs and humans,” says Ginns.

“If the canine construct is fully accepted by other OCD researchers, this spontaneously-occurring model of the condition in humans, right down to the biological pathways involved, could help point the way to novel and more effective treatments for such a debilitating condition,” Dodman says.

OCD – dogs and humans are not that different

A collaboration between veterinarians at the Cummings School of Veterinary Medicine at Tufts University and researchers at the McLean Imaging Center at McLean Hospital, in Belmont, Massachusetts have published their findings in Progress in Neuro-Psychopharmacology & Biological Psychiatry.

The study involved 16 Doberman Pinschers, 8 with CCD and 8 without.  Dogs with CCD engage in repetitious and destructive behaviors such as flank- and blanket-sucking, tail chasing, and chewing,  whereas people with OCD tend to have repetitious behaviors that interfere with their daily life.

Here’s a video of a German Shepherd with CCD engaging in a circling behavior:

“While the study sample was small and further research is needed, the results further validate that dogs with CCD can provide insight and understanding into anxiety disorders that affect people.  Dogs exhibit the same behavioral characteristics, respond to the same medication, have a genetic basis to the disorder, and we now know have the same structural brain abnormalities as people with OCD,” said Nicholas Dodman, BVMS, DACVB, professor of clinical sciences at the Cummings School of Veterinary Medicine at Tufts University.

It should be noted that the research also provides insight into dog behavior and management.  In some cases, a dog labelled as ‘bad’ or ‘destructive’ may actually have a biological basis for their problems.

The genetics research group at the University of Helsinki has published its findings into a study of tail chasing in dogs.  The study involved 400 dogs and questionnaires to the owners about their dog’s behaviour.  Samples of each dog’s blood were also taken.

The questionnaires covered behaviours, aspects of the dog’s puppyhood and daily routines.  Owners were also asked to evaluate their dog’s personality.

The study aimed to describe the characteristics of tail chasing in dogs and to ascertain the environmental risk factors for the disorder.  The researchers also wanted to know if a previously identified gene that has been associated with obsessive compulsive disorder (OCD)  had a role to play.

Dogs may be a good model for studying OCD in humans because they are physiologically similar and share our environment.  Consequently, this research has wider implications.