My Senator and Me

With the world’s eyes on the Presidential Election of 2016 today, I thought of this book – My Senator and Me,  A Dog’s Eye View of Washington.  Written by the late Senator Edward Kennedy of Massachusetts in 2006, this picture book features the Senator’s Portuguese Water Dog, Splash.

Splash was a regular companion to Senator Kennedy during the later years of his career in Washington, DC.

The book explains how a bill becomes a law, the roles of Congress and the Senate and includes profiles of the Senator and Splash.  The story follows the senator through a busy day including a visit by schoolchildren to The Capitol.

Senator Kennedy passed away in 2009; Splash followed him in 2010.  With US politics on everyone’s mind today – sitting down with your kids and explaining how the Government works during the four years after the election would be entirely appropriate. 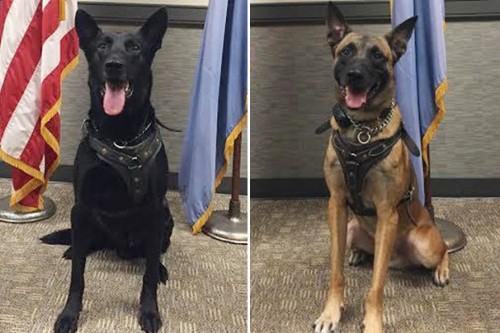 Washington, DC is full of attractions like memorials, museums and other events.  Today, I also came across a group of three professional dog walkers… 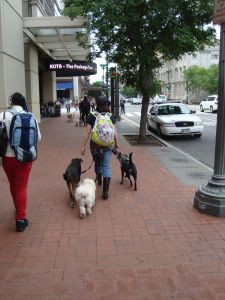 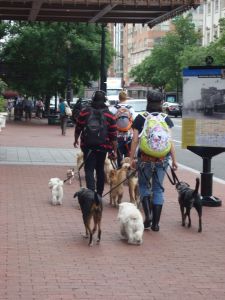 … and when we got to the front of the line, they happily posed for a picture.  How many breeds can you identify?  There’s one little dog wearing a dress and another wearing a thundershirt for anxiety.  The German Shepherd was the largest in the group. 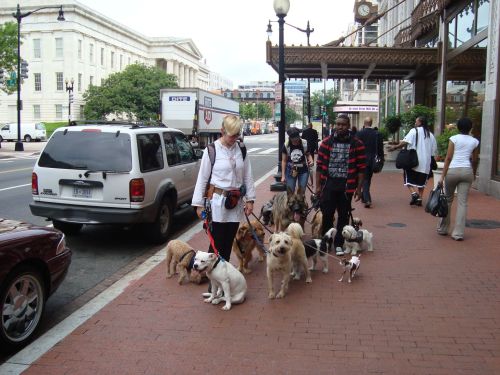 The Shake Shack is a chain of restaurants that originated in New York as a hot dog stand in Madison Square Park.  Serving frozen custard, burgers and other drinks, the restaurants are currently found in six states and internationally.

What makes this restaurant chain very special is that they serve dog biscuits, too.  Since the chain started as a mobile hot dog stand, doggy customers have been part of the history of the chain and the chain sells dog treats as a way of honouring that history.

When buying products at the Shake Shack, you can also buy:

If you are visiting Washington, DC, one of the best memorials on the Mall is to commemorate the life and achievements of Franklin Delano Roosevelt (FDR).

And one reason I liked this monument is that FDR’s dog, Fala, is also featured and this makes him unique – the only presidential dog that has been honoured in this way.

Fala, a Scottish Terrier, lived from 7th April 1940 to 5th April 1952.  FDR renamed the dog referring to the name of his 15th century Scottish ancestor (John Murray), “Murray the Outlaw of Falahill, ”  The name was then shortened to “Fala.” 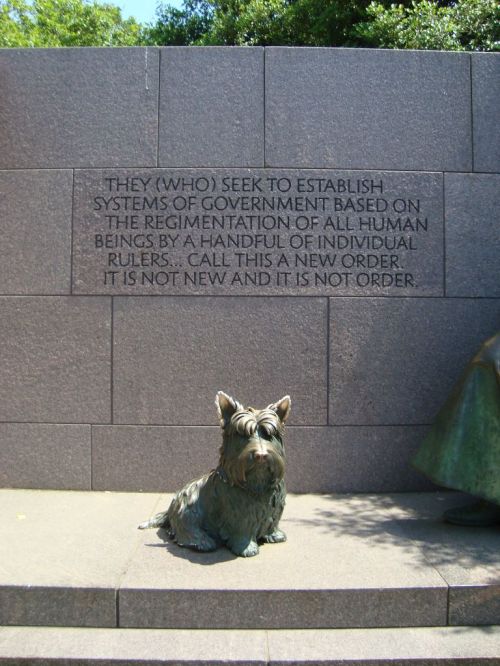 Fala accompanied FDR everywhere; it was said that FDR fed Fala personally.  Fala’s leather collar had a silver plate on it which read, “Fala, the White House.”

Fala was often present during FDR’s fireside chats (via radio) to the US public.  So, it makes sense that Fala is seen at the FDR memorial sitting at his master’s side.

The Fala statue is quite large; this is me sitting next to it (for scale). 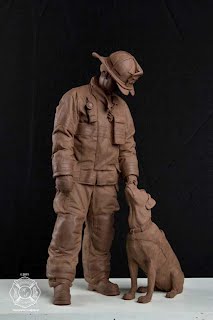 The winning design features a firefighter looking upon his detection dog, who is ready for duty

The non-profit organisation National Fire Dog Monument has been successful in its fundraising to build a monument to Certified Accelerant Detection Dogs.  The bronze statue is entitled “From Ashes to Answers” and will be permanently displayed in front of a fire station in Washington, DC.

The inspiration for the dog in the sculpture is Erin, Colorado’s first arson dog who died from cancer.

As the statue is transported to its final home, there will be a roadshow from June 21 to 28, 2012 stopping in 12 cities starting in Denver, Colorado and ending in Washington, with other stops in Kansas, Illinois, Missouri, Indiana, Pennsylvania, New Jersey and New York.   The full schedule of stops  can be found here.

Arson dogs are trained to detect hydrocarbons and other accelerants that are used to deliberately light fires.  The use of dogs in this service is yet another way that working dogs are used to benefit communities and the new monument is a fitting tribute to their contribution.

July 27th marked the launch of the US Postal Service’s newest stamp bearing the image of a dog.

The Owney stamp features the image of Owney, a mixed breed dog that was drawn to the US mail and followed it onto mail wagons, subsequently traveling across the United States collecting tags from each of his stops.  Owney lived at the Albany, New York, post office but would regularly sleep among empty mail bags and travel with them to locations across the United States.

Workers thought Owney was a good luck charm because, in an age of many train accidents, Owney’s trains were never involved in one.

The dog died in 1897 and his body was sent to a taxidermist for preservation.  Since 1993, Owney has been on display at the Smithsonian Institution’s National Postal Museum in Washington DC, which hosted the launch of the new stamp.  The tags Owney collected have also been preserved.

Read more about the Owney and the launch of the new stamp on this page.