Christchurch based animal welfare charity K9 Rescue and Rehoming has paired well-muscled men with dogs available for adoption in their 2014 calendar. 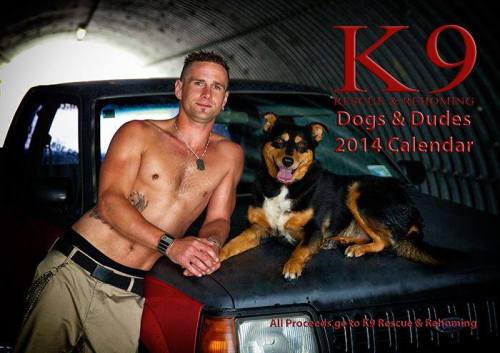 Entitled Dogs and Dudes, this fundraising calendar includes photographs of New Zealand actors and other local celebrities who were willing to bare their bodies to support dog adoption.

The best way to organise a purchase is to contact Trisha through the organisation’s Facebook page.  Calendars cost NZ$25

And dog owners get to enjoy a little beefcake all year long, combined with some really beautiful dog photos, too!

Beyonce was born on 8 March 2012  to Casey, a pregnant dog that was scheduled to be euthanised.  She claimed the title of the World’s Smallest Puppy because she could fit into a teaspoon!  She wasn’t expected to survive but proved everyone wrong.

Beyonce was saved because of the efforts of The Grace Foundation of Northern California, an animal rescue and rehabilitation facility.  Her story was picked up widely in media outlets including CBS, The Washington Post, the Associated Press and Reuters.  Now The Grace Foundation is using Beyonce’s celebrity status in a new fundraising campaign for Mother’s Day.

Named the  I’m a Survivor Fund (after the Beyonce song), funds will be used to save healthy mums and their puppies.   Many of these dogs are euthanised in shelters across California and the wider United States (3.4 million in total each year) because of a lack of facilities and adoptive families.

The messages from the Tiny Beyonce campaign are simple:

1.  Spay and neuter your pets to prevent overpopulation of our furry friends

2.  Adopt from rescues and shelters to save animals in need

3.  Help a rescue or shelter save lives. Volunteer or donate services, resources, or money

All moms (and mums) deserve recognition on Mother’s Day.  Why not make a donation to the I’m a Survivor Fund as part of your Mother’s Day gift?